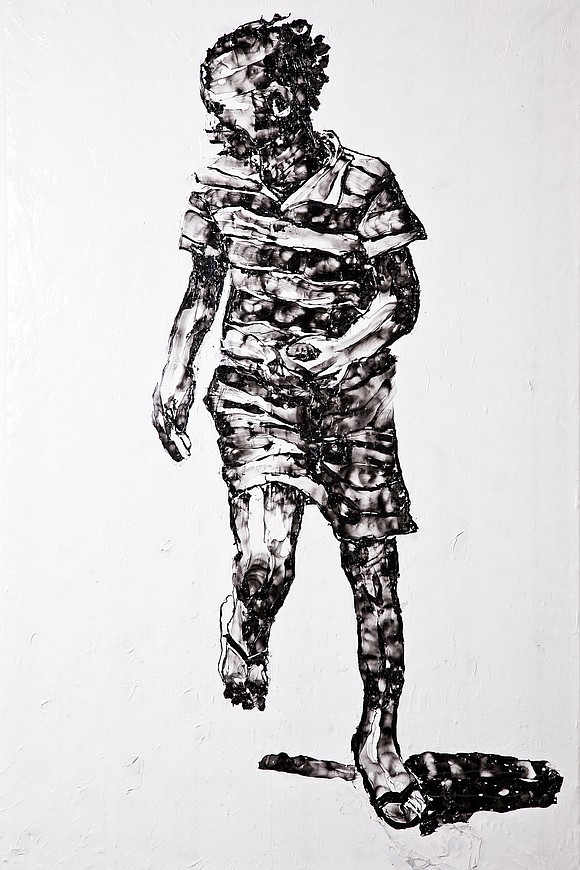 While other artists might use watercolors or oil paints, Mbongeni Buthelezi uses waste plastics to create highly textured portraits at his studio in Booysens, Johannesburg. Mandatory Credit: Mbongeni Buthelezi

(CNN) -- While other artists might use watercolors or oil paints, Mbongeni Buthelezi uses waste plastics to create highly textured portraits at his studio in Booysens, Johannesburg.

His medium is the plastic litter he collects from local rubbish dumps and city streets. "Animals are dying, fish in the ocean are dying -- because of this material and because of us as human beings," Buthelezi said. "It is us that need to take responsibility."

An artist and activist, Buthelezi, 56, first found his talent for the creative as a boy in rural KwaZulu-Natal, South Africa. He sculpted clay figurines of the livestock around his village: cows, horses and goats.

"I grew up with my father's animals, the cattle were an important part of my life," said Buthelezi. But not everything in this rural setting was natural.

He explained that plastic litter was so common in grazing areas that it became an unwelcome part of the cows' regular diet. "We would see these cows die because they had eaten plastics," Buthelezi said.

With plastic waste growing around the world, Buthelezi is using his work to both highlight and combat the issue.

Buthelezi's use of waste wasn't always in defense of the environment; he first began using plastic litter for his art because he couldn't afford more traditional mediums.

At 22, when the country was still under apartheid, he enrolled in full-time classes at a community arts school in Soweto, a township in Johannesburg. He took with him just two blankets, very little money, and a lot of optimism. There he lived in a small room and worked odd jobs between classes to afford rent and food. He had no money for materials.

"It was the '80s, and South Africa was facing this transitional phase where politics was very volatile," said Buthelezi.

He added that the political climate didn't offer much opportunity for young Black South Africans trying to build their career, especially those from the townships. The main problem was a lack of funding.

Buthelezi explained that there was no formal schooling in the townships, and the community-based institutions, like his college, received no support from the state.

"The school introduced us to things like collage -- using old magazines to create an artwork if you don't have money for paints," said Buthelezi. "Without those fancy traditional ways of making art, we expanded our way of looking at art and life."

"Next to my studio at the college was a dumping site," he recalled. "I saw all of these brilliant colors, these materials ... and I said to myself, what can I do to make sense of these plastics that are everywhere?"

He began collecting plastic litter to "paint" with in lieu of expensive oil paints. He developed a technique of using an electric heat gun that produced hot air to melt the plastic and then apply it to a recycled canvas. According to Buthelezi this is more environmentally friendly than using flames to melt plastic and doesn't release noxious fumes into the atmosphere.

After completing his studies at the African Institute of Art and subsequently the Johannesburg Art Foundation, he went on to achieve an advanced Diploma in Fine Arts from the University of the Witwatersrand.

As his career progressed, he thought back to his childhood experiences of plastic and the role plastic pollution played in the death of many of his father's cows. By the '90s, Buthelezi was a professional artist, and he was determined to use innovation in art for the good of the planet.

"As an artist, I am the mirror of my society"

Buthelezi still makes works using the same method of melting waste plastic. The works are figurative and mostly explore the experience of growing up in a South African township. Throughout his career he has used his art to educate and begin conversations on global plastic waste. "The world we live in today can offer us everything we need to make art without manufacturing more," he said.

Buthelezi has held exhibitions, participated in festivals, led workshops, and taken up artist residencies in countries including Germany, the USA, Barbados, Egypt, Australia, and Saudi Arabia.

"As an artist I am the mirror of my society," says Buthelezi. "I'm supposed to reflect on what is happening on the ground where I live." And for him, what's "on the ground" is plastic.

In March, he spoke at a South African National Science and Technology Forum discussion on plastic innovation and towards the end of the year he will participate in an art and environment festival in Abu Dhabi.

Although his efforts have won widespread praise, Buthelezi says not everyone has been so supportive. "Some people say, 'you will run out of plastics one day and then you won't be able to do your work,'" he said. "They don't understand that I would be happy if that happened. That is what I'm fighting for!"