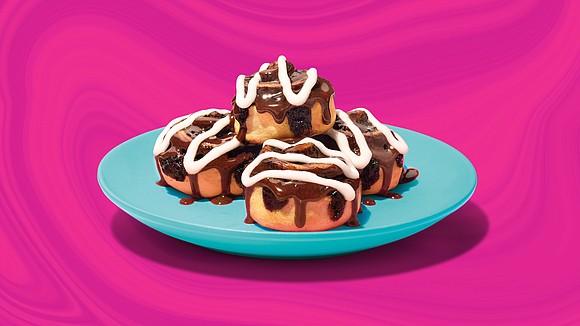 For the first time ever in the United States, Cinnabon is selling a new food item that doesn't contain cinnamon. Mandatory Credit: Cinnabon

For the first time ever in the United States, the sweet treat chain is selling a new food item that doesn't contain cinnamon. Until September, the chain is selling Chocolate BonBites, which are bite-sized chocolate rolls that Cinnabon describes as a "chocolatey take" on its miniature sized cinnamon rolls.

Available in four-count and 16-count packs, the treats are baked with sweet dough, layered with chocolate schmear and topped with both chocolate and cream cheese frosting. Prices for the limited-time offering begins at $4.79 for the four-count pack.

"It's something familiar to our guests, where we have our legendary dough and what we do really well. Now we're adding that chocolate twist to it," said Tracey Young, Cinnabon's chief brand officer, in an interview with CNN Business. "We're really excited about bringing — after 35 years — a chocolate product to our lineup."

Chocolate has long been on Cinnabon's radar, with Young saying the flavor "always scores high, but even higher now," prompting them to explore a chocolate-centric product. It already exists on the menu in some drinks and in Cookie BonBites, a treat that combines cinnamon rolls and chocolate chip cookies.

"When people come to us, they tend to be wanting to get that indulgent thing we're known for," Young said nodding to cinnamon. "Now that as chocolate has become a little bit more relevant and forward with our guests, this is the best opportunity to introduce an limited time offering."

As for settling on the new product, the chain has found success with it overseas.

A version of Chocolate BonBites has been sold at Cinnabon's international locations in over 20 countries, including in Spain, India and the United Kingdom for the past few years. However, the US version includes chocolate frosting, which the international product doesn't.

Chocolate BonBites could become a permanent addition to its menu if customers enjoy it, Young said. Other products were tested in its research, but this treat outscored "by far" the other food it trialed, she added.

Cinnabon is owned by privately held Focus Brands, which also controls other food court staples like Auntie Anne's and Carvel. Total sales across its roughly 1,000 US locations raked in $224 million last year, an increase of more than 35% compared to the year prior according to data from Technomic.

Like other chains, Cinnabon has been hurt by inflation as commodity costs rise. Cinnabon locations are largely franchised, with some opting to raise menu prices and others haven't.

"We're always looking at ways to bring value top of mind,. but of course the economy and inflationary pressures don't help," Young admitted.