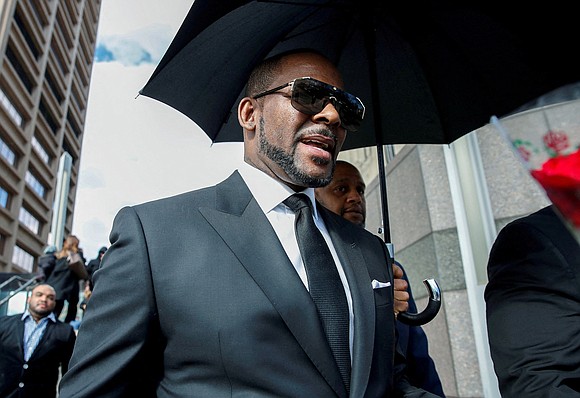 As R. Kelly faces decades in prison for sex trafficking charges, newly unsealed court documents reveal graphic details about the R&B singer's own childhood abuse, which his attorneys hope will convince a judge to give him a more lenient sentence. Mandatory Credit: Kamil Krzaczynski/Reuters/FILE

Disgraced R&B singer R. Kelly was sentenced to 30 years in prison Wednesday, according to federal prosecutors, following his conviction last year on federal racketeering and sex trafficking charges stemming from his efforts over years to use his fame to ensnare victims he sexually abused.

Prosecutors had asked the judge to sentence Kelly, 55, to more than 25 years behind bars, while his defense attorneys asked for 10 or fewer, saying prosecutors' request was "tantamount to a life sentence."

R. Kelly could be sentenced to decades in prison Wednesday following his conviction in federal court last year on racketeering and sex trafficking charges.

While prosecutors in New York have recommended the disgraced R&B singer be sentenced to more than 25 years, citing "the need to protect the public from further crimes," newly unsealed court documents revealed graphic details about Kelly's own childhood abuse that his attorneys hope will convince a judge to give him a more lenient sentence.

Defense attorneys have argued Kelly should be sentenced to 10 or fewer years, saying anything more would be "greater than necessary" and jailing the 55-year-old singer for more than a quarter-century would be "tantamount to a life sentence."

US District Court Judge Ann Donnelly is expected to hand down Kelly's sentence, possibly including a fine.

Kelly, whose full name is Robert Sylvester Kelly, wore a tan prison uniform, dark-rimmed glasses and a black mask at Wednesday's hearing, which survivors in the case also attended. The court heard impact statements from seven of Kelly's victims, including Jane Doe 2, who testified at trial.

"It's been 23 years since we knew each other, and you've victimized a lot of girls since then," she said, addressing Kelly. She later added: "Now it's your turn to have your freedom taken from you."

A jury convicted Kelly last September on nine counts, including one charge of racketeering and eight counts of violations of the Mann Act, a sex trafficking law. Prosecutors from the Eastern District of New York accused Kelly of using his status as a celebrity and a "network of people at his disposal to target girls, boys and young women for his own sexual gratification."

The five-week federal trial in Brooklyn included testimony from witnesses who said they were sexually and physically abused by Kelly. The court also heard from people involved with orchestrating the disgraced R&B singer's 1994 marriage to the late singer Aaliyah when she was just 15 years old and he was an adult after she believed she'd gotten pregnant.

"No one can undo the harm that has been done to these victims," attorney Gloria Allred, who represented three victims who testified, told reporters Wednesday outside court. "But at least it's time for Mr. Kelly to be accountable."

Defense attorneys and prosecutors argued Wednesday in court over whether Kelly even could pay a fine. The defense said he is "pretty close to indigent" and could not. Prosecutors disagreed, saying money from the sale of some of his music rights and millions of dollars in royalties held by Sony could cover any fine.

In the nine months since his conviction, Kelly has replaced his entire legal team with Jennifer Bonjean and her firm. Bonjean is the attorney who helped Bill Cosby get his sexual assault conviction overturned and also represented Cosby in a civil case he lost this month at trial.

Donnelly will have broad discretion to impose a sentence she feels is appropriate, said CNN legal analyst Elie Honig, a former federal prosecutor who has handled cases involving the racketeering and Mann Act laws at play in Kelly's case.

"Typically after a trial, it's tougher for a defendant to get his recommended sentencing range," Honig said. "Now the judge has seen all the evidence against the defendant, has heard from victims and that tends to drive the penalty up."

Kelly is being held at a federal detention facility in Brooklyn and, once sentenced, is expected to be moved back to Chicago, where he faces another federal trial in August on child pornography and obstruction charges.

In over 14 hours of interviews with psychiatrist experts, Kelly said his closest relationship growing up was with his mother. His earliest memories were watching his mom perform as a singer in a band called "Six Pack," and he would often accompany her to McDonald's where she would drink coffee and they would share a pastry.

Kelly had never met his father and described his mother's death as the most tragic event of his life, saying he would go to McDonald's frequently to smell the coffee and remember her, according to a letter filed by Renee Sorrentino, a clinical assistant professor at Harvard Medical School.

"To me, the 'M' stands for mom. Going to McDonald's is always being around my mother," Kelly said.

But his childhood was also marked by trauma.

Kelly saw a childhood sweetheart drown when he was a little boy. And people interviewed by psychiatrist experts say Kelly was repeatedly sexually abused beginning when he was a 6 or 7-year-old boy, his attorney wrote, saying he was abused by his older sister and also a landlord, at times on a "weekly basis."

Sorrentino said in her letter Kelly's childhood sexual abuse may have contributed to his "hypersexuality," or difficulty controlling sexual urges, and believes it was a factor in his criminal convictions.

While Kelly was convicted of sexual exploitation of a child, Sorrentino refused to diagnose Kelly with pedophilia because he told her his "sexual behavior has never involved prepubescent individuals," she said.

Faith, another woman who testified at Kelly's trial, countered that defense argument Wednesday in her victim impact statement, saying her own father had also been sexually abused as a child but "never molested me."

Support for the singer

Among the letters asking for a shorter sentence for Kelly is one written by Diana Copeland, Kelly's former assistant who testified as a government witness and said she wrote a letter in support of Kelly because it was the "right thing to do."

"God doesn't want us to throw humans away," Copeland wrote. "If we have the audacity to care for the perpetrators as well as the victims, we can all rise."

Joycelyn Savage, who was considered a victim of Kelly's by prosecutors, also remains a supporter.

"Robert and I are deeply in love and it breaks my heart that the government has created a narrative that I'm a victim," Savage wrote. "I'm a grown woman, and can speak for myself which is why I wanted to provide this letter to the court."

In her letter, Savage revealed she is now engaged to Kelly.

Ahead of the sentencing, a Chicago man who had attended Kelly's trial in Brooklyn was arrested and charged for making threats against the three US attorneys who prosecuted Kelly, a copy of his arrest warrant shows.

According to the arrest warrant, Gunn posted video to his YouTube channel in October, shortly after Kelly was found guilty, that showed an image of the US Attorney's Office for the Eastern District of New York where the women work. Prosecutors believe a voice narrating the video is Gunn's, and he says, "That's where they at. That's where they work at ... We're going to storm the office," saying each of the three prosecutors' names.

"If you ain't got the stomach for the sh*t we 'bout to do, I'm asking that you just bail out," he allegedly said in the video.

Prosecutors also analyzed a CashApp account linked to Gunn that shows multiple transactions from February 26, 2021, to June 1 that indicate Gunn "engaged in the sale of firearm ammunition in relation to the Kelly matter," they said. Transactions included payments for $20 with descriptions saying "30 rounds.. free R kelly." CNN has reached out to an attorney for Kelly for comment.

Prosecutors believe Gunn was planning to attend Kelly's sentencing on Wednesday after he posted another video saying he had a "spot" for supporters to meet up near the courthouse.

CNN has reached out to an attorney for Gunn, who is expected to have a detention hearing Wednesday.