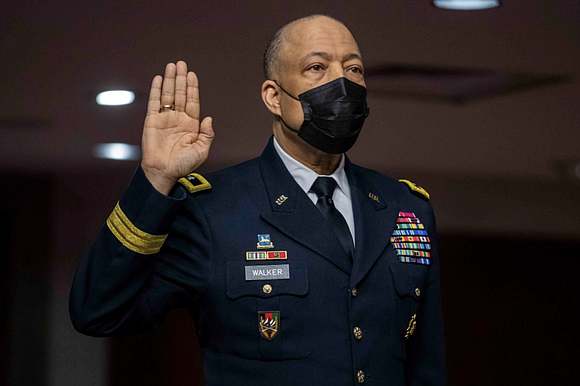 Maj. Gen. William J. Walker, the commanding general of the District of Columbia National Guard, is sworn in during a March 3 Senate hearing examining the Jan. 6 attack on the Capitol. (EPA-EFE)

Walker is uniquely positioned to lead security efforts on the House side of the Capitol complex.

On Jan. 6, at around 2:22 p.m., Walker and officials from Capitol Police and the Metropolitan Police Department pleaded for permission to send Guard troops to help defend the Capitol against pro-Trump insurrectionists who stormed the Capitol. But Walker's ability to deploy troops to the Capitol was hampered by instructions from then-acting Defense Secretary Christopher Miller and then-Army Secretary Ryan McCarthy. Walker didn't receive approval until 5 p.m.

Around 150 guardsmen, complete with a 40-person Quick Reaction Force, were a short distance away and left waiting while violence engulfed the Capitol.

“I believe that number could have made a difference,” Walker said during a joint hearing Wednesday of the Senate Rules and Administration and Homeland Security committees on March 3. “We could help extend the perimeter and help push back the crowd.”

“Throughout his long, dedicated career in public service, General William Walker has proven to be a leader of great integrity and experience who will bring his steady and patriotic leadership to this vital role,” Pelosi said in a statement. “His historic appointment as the first Black American to serve as Sergeant-at-Arms is an important step forward for this institution and our nation."

Walker has 39 years of military experience, most recently as commanding general of the D.C. National Guard. Additionally, he has worked as a special agent for the Drug Enforcement Administration.

The House must vote to elect Walker to the position. The announcement was met with support from California's Kevin McCarthy, the top House Republican.

“Every member, staffer, employee, and visitor to the Capitol should feel safe with Maj. Gen. Walker at the helm of Sergeant at Arms operations,” McCarthy said in a statement. “We are thankful for his continued service to our country, and I look forward to working with him as he transitions to this new role.”

The pick was recommended by retired Army Lt. Gen. Russel Honoré, according to House Administration Committee Chairperson Zoe Lofgren, whose panel has oversight of House security.

“His experience led him to be recommended by General Honoré who was charged with reviewing January 6,” the California Democrat said in a statement. “The responsibility of ensuring the security of the House of Representatives and examining our security apparatus moving forward is important, and I look forward to working with him.”

Walker takes over the role from acting House Sergeant-at-Arms Timothy Blodgett, a temporary replacement for Paul D. Irving, who resigned after the attack along with Michael Stenger, the former Senate sergeant-at-arms, and Steven Sund, the former Capitol Police chief.

Earlier this week, the Senate confirmed retired Army Lt. Gen. Karen Gibson to be the new sergeant-at-arms in that chamber.

Andrew Clevenger contributed to this report.