One arrested with weapon at Joint Base Andrews after VP Harris' arrival, another at large 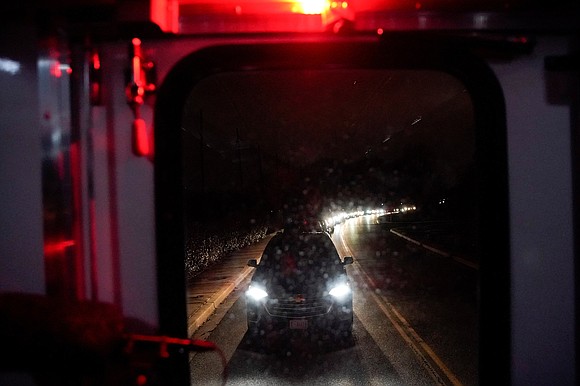 A line of cars and people wait to exit a gate at Joint base Andrews during a lockdown situation in Maryland, US on Sunday, March 6. Mandatory Credit: ELIZABETH FRANTZ/REUTERS

(CNN) -- Security personnel at Joint Base Andrews in Maryland on Sunday night arrested one person with a weapon, while another remains at large, according to a news release, shortly after Vice President Kamala Harris had arrived on the base.

Security personnel deployed barriers to stop the intruders' vehicle, which arrived around 9 p.m. ET and failed to follow commands at the base's Main Gate, the release said. No shots were fired.

Harris had arrived on the base at 8:47 p.m. ET via Air Force Two, according to pool reports, after a trip to Selma, Alabama, to mark the 57th anniversary of Bloody Sunday.

The motive behind the incident was not immediately clear.

In an update Monday morning, base officials said a full sweep of the area was conducted and evidence was found indicating the second intruder "departed the installation."

President Joe Biden traveled directly back to the White House via Marine One after spending the weekend in Wilmington, Delaware.

The TV pool that was traveling with Biden landed separately at Joint Base Andrews and saw people searching a wooded area with flashlights and several police cars traveling at high speed.

CNN has reached out to the US Secret Service for comment.