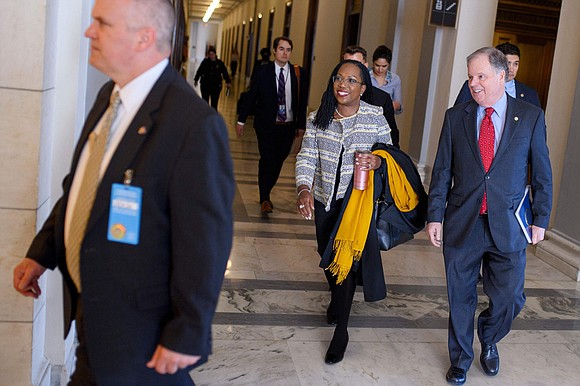 (CNN) -- Judge Ketanji Brown Jackson has already appeared before the Senate three times in confirmation proceedings for prior roles. But several days of hearings for her Supreme Court nomination this week will be the highest-profile -- and likely most contentious -- grilling that Jackson has faced from lawmakers.

Democrats have signaled they will highlight the historic nature of her nomination -- if confirmed, she'll be the first Black woman on the Supreme Court -- and her qualifications, which lawmakers of both parties have described as impressive.

"Not a single justice has been a Black woman," said Durbin, an Illinois Democrat. "You, Judge Jackson, can be the first."

But Senate Republicans say they still have questions about Jackson's record, even as they've said they'll keep proceedings substantive and dignified.

Jackson, a Harvard Law graduate who grew up in Miami, has served less than a year in her current role on the DC US Circuit Court of Appeals. Before that, she was a judge on DC's federal trial court for eight years. She also vice-chaired the US Sentencing Commission between 2010 and 2014. All three roles required her to sit for Senate confirmation testimony -- in hearings that featured a more low-key tone than what is expected this week.

The two days of Jackson questioning will begin Tuesday, after a round of proceedings Monday featuring opening statements and her introduction.

Here is what might come up at her hearing.

Senate Judiciary Republicans have grilled lower court nominees on criminal justice policies that they describe as soft on crime. And in floor remarks on Thursday, Senate Minority Leader Mitch McConnell previewed that focus on Jackson. His speech critiqued the praise she has received from supporters for how her experience as a public defender gives her "empathy" as a judge.

"Even amidst the national crime wave, a disproportionate share of the new judges President (Joe) Biden has nominated share this professional background that liberals say gives special empathy for criminal defendants," the Kentucky Republican said. He added that Biden "is deliberately working to make the whole federal judiciary soft on crime."

Jackson may point to her personal background to counter this attack, as she has done before. With an uncle who was prosecuted for a drug offense, and several members of her family -- including her brother -- who served in law enforcement, Jackson has relationships that she says have helped her see both sides of the issue.

An extension of the "soft on crime" attack is the claim, somewhat misleadingly made by GOP Sen. Josh Hawley last week, that Jackson is soft on child pornography crimes.

His claims rely on two factors: First is her sentencing record in some cases, which is within the mainstream of how many other judges approach the offenses in question; second are statements she's made about the legal issues around sex crimes, including in a 1996 law review article and in her role on the sentencing commission.

Some of the sentencing commission comments Hawley highlighted were in response to the testimony of witnesses at commission hearings. A review of the hearing transcript and interviews with two experts who testified belie the claim that Jackson showed leniency toward child pornography during a daylong session that Hawley quoted from in questioning her record. Still, the Missouri Republican has stood by his criticism.

Work on the US Sentencing Commission

In addition to the commission work on child sex crimes, other aspects of Jackson's tenure there could come up. Before serving as vice chair, she served a two-year stint as an assistant special counsel for the commission in the mid-2000s.

Republicans are poring over thousands of documents for more information on the stances she took while working for the commission.

At her 2021 hearing, several Republicans asked her about the support her nomination had received from the left-wing group Demand Justice and other progressive organizations that have advocated for expanding the number of justices on the Supreme Court. Jackson declined to weigh in on the idea.

Her refusal to answer the question in her recent meeting with McConnell, according to his account of their discussion, has prompted criticism from the Kentucky Republican.

Expect Democrats to note that Trump nominee and now Justice Amy Coney Barrett also dodged the court expansion question when she was testifying in her Supreme Court confirmation hearing.

Does she have a judicial philosophy?

Republicans say they weren't satisfied that Jackson did not elaborate on a specific judicial philosophy -- such as originalism or the "living Constitution" approach -- during her DC Circuit nomination hearing. They're likely to ask questions that try to suss out more about how she approaches the law.

As a public defender, Jackson represented a Guantanamo Bay detainee, but it's her advocacy for detainees while she worked at a private firm that Republicans are particularly skeptical of.

"Most of the time you have a choice of who your clients are. And sometimes you ought to just say, just say no," Sen. John Cornyn, a Texas Republican who sits on the Judiciary Committee, told CNN earlier this month.

The advocacy came in the form of amici briefs, penned while an attorney at the firm Morrison & Foerster, supporting detainees in cases before the Supreme Court. A 5-4 ruling, with then-Justice Anthony Kennedy joining the four justices in the liberal wing at the time, in a case called Boumediene v. Bush established that Guantanamo prisoners had habeas corpus rights.

Jackson has twice ruled against former President Donald Trump or his administration in cases concerning the disclosure of information from his White House.

The first was the 2019 opinion she penned as a district court judge in which she wrote that "Presidents are not Kings" while rejecting the Trump administration's argument that White House counsel Don McGahn was absolutely immune from a congressional subpoena. (After several twists at the DC Circuit level, the case was ultimately settled by the Biden administration).

Late last year, Jackson was on the DC Circuit panel that unanimously rejected Trump's attempts to prevent the release of his White House records to the House committee investigating the January 6 insurrection -- a decision the Supreme Court refused to overturn.

Republicans may seek to contrast those rulings favoring disclosure with a 2015 Freedom of Information Act decision she issued shielding the emails of an aide to former Secretary of State Hillary Clinton.

In 2019, Jackson halted a Trump administration move to expand the categories of noncitizens that may be subjected to expedited deportation procedures in a ruling that ultimately was reversed on appeal.

"I have a number of immigration cases and in those cases -- like the one you mentioned -- what I am doing is, I am evaluating the ... immigration laws' very complex scheme, the facts in the particular case and the claims that are being made, the arguments of the parties," Jackson said at the time. "I am not assessing the policy."

Jackson also notably dismissed Trump-era lawsuits seeking to challenge the building of a wall along the US Southern border.

Service on Montrose Christian School board

The time Jackson spent on the board of Montrose Christian School, a private Christian school in Maryland, between 2010 and 2011 was a topic of Republican questioning in her appellate confirmation hearing, where she distanced herself from the stances the school took against same-sex marriage and abortion.

While asserting her commitment to the principles of religious liberty, she said at the 2021 confirmation hearing, "I have served on many boards and I don't necessarily agree with all of the statements of all the things that those boards might have in their materials."

Jackson has not issued any substantive opinions on abortion rights. But as a district court judge, she halted the Trump administration's attempts to block federal funding to Planned Parenthood.

Her work as a private attorney, on an amicus brief supporting a Massachusetts clinic's buffer zone law, has also attracted the ire of anti-abortion rights groups. The Supreme Court ultimately struck down the law.

This Story has been updated with a quote from Sen. Dick Durbin's opening statement on Monday.