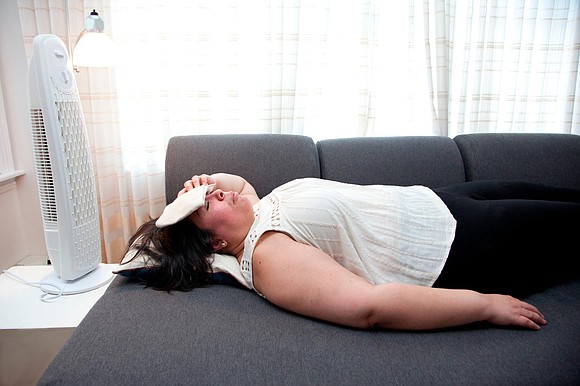 People around the world are likely to lose 50 to 58 hours of sleep a year by 2099 due to global warming, a new study revealed. Mandatory Credit: iStockphoto/Getty Images

Researchers used wristbands with internal accelerometers to measure sleep duration and sleep timing in over 47,000 adults across 68 countries for an average of six months for a study published in the journal One Earth.

Adults should get seven to nine hours of sleep, according to the National Sleep Foundation. The likelihood of getting less than seven hours of sleep increased by 3.5% if minimum outside nighttime temperatures exceeded 77 degrees Fahrenheit (25 degrees Celsius) compared with the baseline temperature of 41 to 50 degrees Fahrenheit (5 to 10 degrees Celsius), the study found.

"The 3.5% sleep loss may initially look like a small number, but it adds up," said Alex Agostini, lecturer in the department of justice and society at the University of South Australia in Adelaide. She was not involved in the study.

When adults do not receive the recommended amount of sleep, they may have issues with concentration, Agostini said. Long-term effects can include an increased risk of some health concerns like cardiovascular and gastrointestinal diseases, she said.

"Many of us have pulled all-nighters at some stage of our lives -- imagine doing this eight times. How would you feel?" Agostini said.

A single night over 86 degrees Fahrenheit (30 degrees Celsius) reduces sleep time by about a quarter hour per person, said lead study author Kelton Minor, doctoral candidate at the Copenhagen Center for Social Data Science at the University of Copenhagen.

However, the elderly lost twice the amount of sleep per degree of warming compared with young or middle-aged adults. What's more, sleep loss was three times larger for seniors in lower-income areas compared with higher-income areas, he said. Women were also about 25% more affected by the rising temperatures than men, Minor added.

Low chance of adapting to the heat

As temperatures continue to rise due to global warming, Minor projected that sleep loss will increase at a faster rate in regions that already face hot climates compared with those that don't.

This similarity in sleep loss indicated that people cannot adapt to higher temperatures over time, he said. Additionally, results showed that people did not appear to recover the sleep they lost during a warm night in the two weeks after a temperature spike, Minor said.

The cost of warmer temperatures

Humans spend about a third of their lives asleep, yet a growing number of people do not sleep enough, Minor said. One-third of adults in the United States report that they typically get less sleep than the recommended seven to nine hours, according to the US Centers for Disease Control and Prevention.

"Many of us already do not get enough sleep, and the contribution of sleep issues relevant to global warming could have real consequences for our health and wellbeing," Agostini said via email.

When humans begin to go to sleep, their core body temperature drops, she said. When the surrounding temperature is warmer, it makes it harder to cool down, which can impact the ability to fall asleep, she explained.

Air conditioning may allow people to adapt to the warmer temperatures, but it's not a reliable, long-term solution, Agostini said.

People living in lower-income countries have less access to air conditioning, which could further the equality divide, Minor said.

"The bigger and better solution to the problem is the use of environmentally friendly building planning and implementing other changes to improve the issue of global warming," she said.