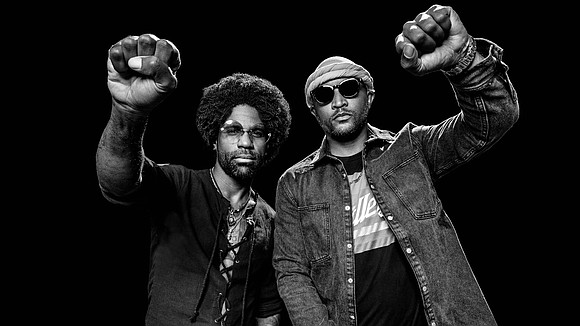 (CNN) -- Two Black radio hosts in Arizona could be a potential roadblock if Kanye West ever decided to sell his "White Lives Matter" T-shirts in the United States.

Ramses Ja and Quinton Ward, hosts of the weekly racial justice radio show Civic Cipher, became the legal owners of the phrase's trademark for its use on clothing late last month. The story was first reported by Capital B.

Taking ownership of the trademark for the phrase, "White Lives Matter," was a difficult decision for the hosts, they said, but they agreed to do it "once it was clear that someone stood to gain significant profit from it, because as you've seen, even though he (West) says some really hurtful, divisive and sometimes crazy things, he has a bit of a zealot following and every time he releases something, it sells out," Ward told CNN.

He said that the phrase has more staying power than they would hope and the best-case scenario is that no one is saying the term in the months to come.

The hosts consider owning the trademark a "responsibility" that includes making sure it doesn't end up in the wrong hands.

They didn't want anyone to potentially profit off the term that the Anti-Defamation League has categorized as a "hate slogan." The phrase is used by White supremacist groups, including the Ku Klux Klan, and described as a racist response to the Black Lives Matter movement.

The trademark was first filed last month, data from the US Patent and Trademark Office shows, on the same day that West wore a shirt with an image of Pope John Paul II on the front and the words "White Lives Matter" written on the back. He wore the shirt during a surprise catwalk event held at Paris fashion week.

The person who initially secured the trademark transferred its ownership to Ja and Ward's company Civic Cipher LLC weeks later, according to data from the US Patent and Trademark Office. CNN has reached out to the original owner for comment.

Civic Cipher told CNN, the original owner of the trademark is a listener of their show and wishes to remain anonymous.

Ja told CNN that ownership of the trademark means having the exclusive right to sell clothing with that term. When the listener found out the rapper-producer "repopularized" the term, "I think that maneuver was primarily to ensure that other people would not profit from it."

Ja and Ward don't know why the listener initially bought the rights to the phrase but they speculate that when the term went viral again, the listener "no longer felt that they were the right person to champion those efforts."

Over the years, West, who has legally changed his name to Ye, has made multiple inflammatory statements that have angered many in the Black community, including his insistence that slavery was a "choice" and "racism is a dated concept." And his recent antisemitic remarks caused companies that he was affiliated with to end their relationships with him, bringing to an end his tenure on Forbes Billionaires List.

Civic Cipher is a nationwide show that started in 2020 to create a space for Black and brown people to have courageous conversations.

The Black community is "beyond rapping and singing" and the show goes beyond what a listener would typically hear on a hip-hop radio station, Ja told CNN.