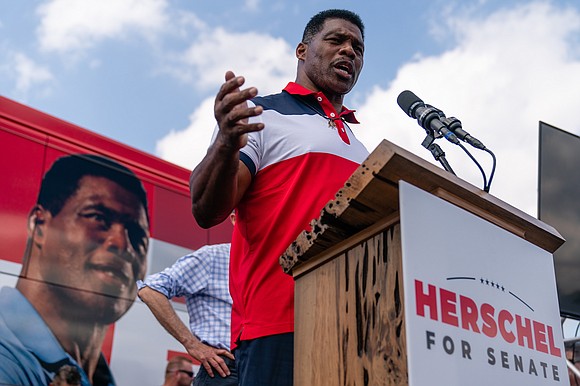 Georgia Republican Senate nominee Herschel Walker, pictured on October 11, in Carrollton, Georgia said as recently as August that he opposes any exceptions to a ban on abortion, despite stating the opposite during his first and only debate against Democratic Sen. Raphael Warnock last week. Mandatory Credit: Elijah Nouvelage/Getty Images

(CNN) -- Why are so many Republicans still supporting Herschel Walker? The answer isn't just hypocrisy or expediency -- it's something much darker and it reveals quite a bit about the true views of too many conservative voters.

Georgia Republican Senate candidate Herschel Walker was reprimanded after pulling out a prop during a debate with his opponent, Democratic Sen. Raphael Warnock. Source: CNN

Walker, the GOP candidate for Senate in Georgia, is a serial fabulist, most recently holding up a fake police badge in a debate against opponent Raphael Warnock in order to bolster his long-standing claim that he was a police officer. But he wasn't -- and the badge-flashing incident, which Walker defended by saying it was a "legit" but honorary sheriff's badge from his hometown, raises the question of whether he's a very brazen liar or someone so out of touch with reality that he actually believes his own tall tales.

Despite these debate hijinks, Walker retains the overwhelming support of Republican voters in Georgia. But this is, after all, the party of former President Donald Trump, the "stop the steal" lie and a smattering of conspiracy theorists and fabricators; maybe much of the right is simply so inured to this kind of behavior that it doesn't faze them, or at least doesn't make them reconsider their votes.

More damning is the fact that Walker has been accused of domestic violence multiple times. Walker has made statements to the media acknowledging that he is "accountable" for past violent behavior, and people shouldn't be "ashamed" for confronting mental health issues.

Meanwhile, according to New York Times reporter Maggie Haberman in her new book, Trump -- the man nearly single-handedly responsible for Walker's ascension in this Senate race -- was dismissive of these allegations: "It's a personal story that, 10 years ago, maybe it would have been a problem...I don't think it's a problem today."

But this dismissive attitude doesn't make Trump (or Walker) an outlier among Republicans. Multiple Republican candidates in the 2022 primaries were accused of domestic violence and sexual assault. (Though Democratic candidates are not immune to these allegations, research shows a partisan divide on how much voters care about such allegations.) Trump, most famously, boasted about assaulting women and was accused of doing exactly that by several of them, but it wasn't enough to tank conservative support.

It's clear that being accused of abusing women simply isn't enough for a man to lose his good standing in this party.

Nor, apparently, is violating the pro-life Republican line that abortion is murder.

Conservatives have spent decades laser-focused on ending the era of safe, legal abortion in the US, and they've had some major successes, most recently with the Supreme Court overturning Roe v. Wade and conservative politicians penning and often passing restrictive anti-abortion laws.

And so when the Daily Beast reported earlier this month that Walker had paid for an ex-girlfriend's abortion -- despite claiming to be so "pro-life" he supports a total ban on the procedure with "no excuses" -- one might think that Republican voters and pundits would draw a line.

Most did not. The Georgia Senate race remains one of the tightest in the country. Walker has acknowledged sending a check to the woman who alleges he paid for her abortion but strenuously denies the money was for that purpose.

This is today's Republican party of "family values": A man who wants to outlaw abortion, but whose ex says he paid for hers (and tried to get her to have a second). CNN has not independently verified the allegations from the woman, who has remained anonymous.

Prominent Republicans have made clear by campaigning for Walker that the allegations simply don't matter to them. This is odd: In the words of the anti-abortion movement, abortion is murder. Most Americans, of course, don't agree, but the stated policy of the Republican Party is that abortion is equivalent to killing a child. And here is a US Senate candidate, accused of facilitating just that. And Republicans have largely shrugged -- or suggested that, despite not admitting wrongdoing, Walker should be given grace and redeemed.

They don't seem interested in extending that spirit of grace and redemption to people who need or have performed abortions but aren't running for office on a Republican ticket. Instead, the nation over, Republican politicians are leading the charge to criminalize abortion, often imposing or trying to impose harsh penalties. If Walker did today in Texas what he is accused of doing back then, Walker could be sued by any vigilante nationwide who decided to target him.

Perhaps many Republican voters believe Walker's new claim that he had no idea what his check was being used for; they've certainly believed the claims of previous chronic dissemblers. But the more nefarious possibility is that they just don't really care either way, because they want him to win.

What Walker's supporters in the Republican Party do seem to believe in is male impunity for all manner of bad behavior, and by extension, women living under someone else's control. That Walker is accused of abusing his ex-wife has barely registered in this campaign, but it's quite relevant to how the man (and his party) see women.

Walker has been vocally in favor of extremely restrictive abortion laws that would radically limit women's rights and opportunities and require that we risk our lives to undergo unwanted, radical and permanent changes to our bodies, our health and our lives. This is a profound violation -- it is telling women and girls everywhere, "your body does not belong to you, and you do not get to decide what happens to it." It's the same message when abusive men attack women: I control you, you do not have the right to safety in your own body, your bodily autonomy doesn't exist.

It's that kind of state control over women -- and really, traditional male control over women -- that pro-life Republicans support (yes, the women among them, too). At the ideological core isn't that abortion is murder; it's that abortion gives women the fuller ability to live their lives outside of male control and outside of traditional roles and expectations, which in turn impinges on men's abilities to behave with impunity.

Herschel Walker is a man who has behaved with impunity: He has not lived up to what conservatives themselves claim is righteous male behavior, instead having affairs and children with women who are not his wife. He lies whenever it's convenient and especially to puff himself up. He stands accused of abusing women and terrorizing his family; he stands accused of paying for a woman's abortion. None of it seems to be a problem for Republicans. Instead, this kind of hypocrisy, entitlement and misogyny seems to be part of the appeal.