The Houston Museum of African American Culture (HMAAC) is proud to present NEGATIVE WOMEN: FOUR PHOTOGRAPHERS QUESTIONING BOUNDARIES, curated by Christopher Blay, HMAAC’s Chief Curator. The exhibition opens for a preview on November 4, from 7 - 9PM with refreshments. There will be an artist’s conversation on Saturday, November 5, at 2PM. The exhibition will be on view through January 27, 2023.

NEGATIVE WOMEN: FOUR PHOTOGRAPHERS QUESTIONING BOUNDARIES, features the works of national and international women photographers pushing against accepted narratives, and telling complete histories. Letitia Huckaby’s focus on Africatown and the last slaving vessel to reach the shores of America, Tanya Habjouqa’s stirring images of Afro-Palestinians, Mari Hernandez’s poignant narratives around boundaries of gender and history, and Ciara Elle Bryant’s deep dive into and across the boundaries of Black culture on the internet and in our communities, all combine to reflect and reveal untold stories and histories. 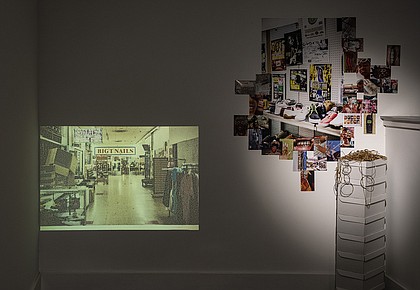 Ciara Elle Bryant’s Server installations serve as a space where culture, Identity, and self-actualization can occupy a current sliver of time all at once. The mixed-media installation includes collage, photographs, audio, moving images, and relics -“a life-sized view of this bibliography in the real.” Bryant mines collected images across black culture that reads as a channel surf through the hive mind of black culture in the new millennium through intensive research practices that expand conversations surrounding black culture.

Artist Mari Hernandez’s self portraits and installations challenges preconceived notions of identity and engages systems of subjugation. She writes about her work, noting, “As a Chicana artist, my concern for the representation of women of color in the arts is integral to my practice. My work explores the concepts of rasquachismo, an aesthetic practice opposing dominant culture and articulating a Chicano identity, and domesticana, a specifically Chicana variation that critiques restrictive gender roles. These sensibilities encourage the inventive and resourceful use of limited and unconventional materials, blur the lines between high and lowbrow, and ultimately challenge art historical ideologies.”

Texan-Jordanian Tanya Habjouqa’s artistic practice explores manifestations of trauma upon the landscape, as well as intimate spaces and interpersonal relationships by means of imagery, archival material, ethnographic interviews, and handwritten text. Born in Jordan and raised between Texas and the Middle East, Habjouqa fuses a mordant sense of irony with unstinting, forensic interrogations of the implications of geopolitical conflict on human lives. Largely focusing on the Middle East, her work on Palestine-Israel has been cited as a powerful investigation of the cross-currents of religion, politics, economics, and cultural production. Her project Occupied Pleasures received critical acclaim from Time Magazine and Smithsonian and the project won a World Press Photo award.

The “Afro-Palestinians” chapter of Habjouqa’s work exhibited in Negative Women is a collaboration between photographer and protagonist Mahmoud Jaddeh—a respected elder of the community and self-described “authentic tour-guide”. From pilgrims to resistance fighters—the Afro Palestinians are a persecuted community within a persecuted community. The photographs take a peak into his yet-to-be-publishd autobiography—including diaries and archival images.

Jaddeh is a founder of the African Community Society, ACS, a Palestinian non-governmental non-profit organization founded by the Afro-Palestinian community in Jerusalem in 1983. It is an offshoot of the Sudanese Welfare Club which was active between 1951 and 1967, the year when Israel occupied Jerusalem. They state, “Our ancestors primarily came from four countries: Chad, Senegal, Nigeria and Sudan. The reason behind moving to Palestine was for pilgrimage to Al-Aqsa Mosque and later on to defend Jerusalem.”

Letitia Huckaby, honored by Houston’s Art League as Texas Artist of the Year, is a photographer, activist, and mother. Her lens and studio practice blurs the boundaries between art, community, and social engagement. The work in Negative Women explores the legacy of Africatown in Mobile, Alabama, home of the descendants of the Clotilda, the last slaving vessel to reach the shores of America. In her images, silhouettes of the descendants of Africatown are paired with the seascape that holds the remains of the ship, burned and sunk to hide the evidence of the ghastly trade. By excavating this history and honoring the memory of the enslaved, Huckaby’s work emphatically invigorates the notion that the full history of America remains untold, and hoists a banner that insists that the unwritten histories be revealed.