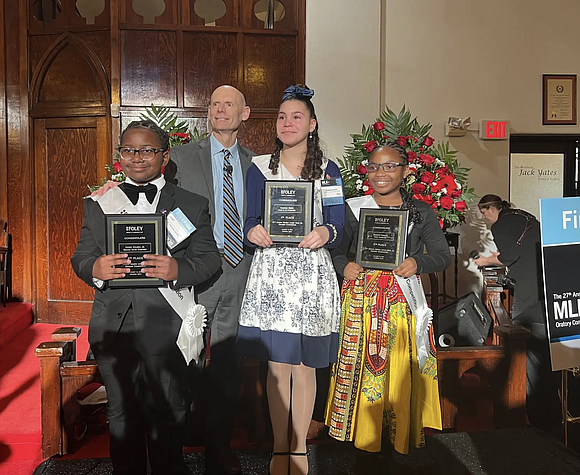 Houston ISD is getting an early start to the MLK holiday. The district held its 27th annual MLK Oratory Speech Competition on Friday. Twelve fourth and fifth grade students from different elementary schools across the district presented three-to-five minute speeches. This year’s theme was “What would Dr. King say to us today about hope for tomorrow.”

The competition was started by Foley and Laudner, law firm, in 1993 to inspire kids to learn about Dr. Martin Luther King Jr. – but also develop their writing and speaking skills. The competition took a two-year hiatus due to the pandemic.

"The purpose of the competition is to remember Dr. King," said Claude Treece, partner with the Foley Law Firm. "That’s the number one thing we want to make sure we do is [to] remember why we have the MLK day holiday – which is to honor Dr. King, remember the things we did."

Treece said about 24 schools participated in the competition and there was a winner chosen at each school. From there a semi-finalists competition was held which ultimately narrowed the competition down to the 12 finalists.

It was important for this competition to involve students so they can learn more about Dr. King, Treece said.

"We think it's important for the students to be thinking about Dr. King, to be reading about him, to do what they need to do to be able to give these speeches in the first place – which requires them to do some reading, some thinking and some studying, said Treece."

The competition also required the students to be creative. They were being judged on delivery, stage presence, decorum, content interpretation, and memorizations.

Kandence Smith, a fifth grader from Law Elementary won the competition. She said she was shocked when her name was called.

“I was thinking what in the world is happening, I was thinking, did they actually just call me, words couldn’t describe what I was feeling through my head," she said.

Smith said she worked hard for months and even during her Christmas break to prepare herself for the competition on Friday. She said she's proud to have honored Dr. King with her speech.

"I'm honoring Dr. King," she said. "And this is about him and I want everyone to know that, we already know what to do in the world to get better – why aren't we doing it."

Kandence received $1,000 and the title of this year’s MLK Oratory Speech Competition winner. The runner-up received $500, and the third place winner received a $300 prize. The other finalists didn't leave empty handed, as they each received $100.