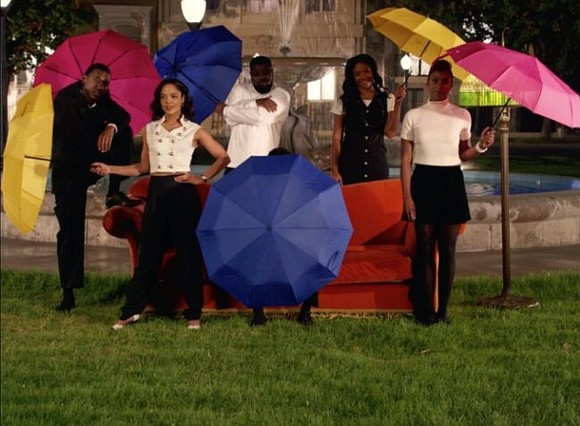 Jay-Z has released the latest video from his 4:44 album. Centered around the “Moonlight” / “La La Land” snafu at this year’s Academy Awards, “Moonlight” from Hov is a call to wonder why people are still signing with labels and entities knowing that they may get screwed over in the end. The video offers a bit of fun surreality to it. Directed by Alan Yang (Masters Of None), Hov grabs Jerrod Carmichael (The Carmichael Show), Tiffany Haddish (Carmichael Show,Girls Trip) and Lil Rel Howrey (Get Out, Carmichael Show) only to pair them with Tessa Thompson, Lakeith Stanfield (Atlanta) and Issa Rae for the black version of Friends.

Playing near exact versions of Joey, Chandler, Ross, Phoebe, Monica and Rachel, it descends into a light-hearted play on the long running NBC show. However, once Hannibal Buress arrives on screen do things take a turn. Similar to his own exit from NBC, Carmichael realizes exactly what he’s signed up for. Doing the kind of comedy he wants to pull off, subversive and smart isn’t enough for execs. Instead, they’ve pigeonholed him into doing a Friends remake. Buress smartly reminds him, “They’ll have you doing Family Ties next.”

With all parties involved, each of them have managed to add their own spin and work on Hollywood norms. Thompson and Issa Rae have challenged authority in regards to black women in lead roles; Stanfield proving to be the glue on last year’s most acclaimed new comedy. Howery was the unofficial hero in the year’s most surprising hit film and Haddish the unsung star of Girl’s Trip. Calculated and poignant without truly attempting to do so, “Moonlight” appeals to exactly what Jay spoke of in regards to record labels. Only the show swaps labels out for Hollywood … and not selling your happiness and power to be on a certain platform.