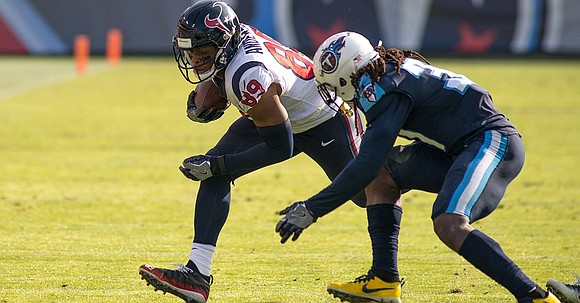 The last time the Houston Texans and Tennessee Titans met in October, the Texans put on an offensive display that led them to a franchise record 57 points. Maybe they should have put some of those points in a safe deposit box to be used two months later. This past Sunday, the Texans lost to the Titans 24 – 13, and are 1- 4 since rookie QB Deshaun Watson went on injured reserve.

Once again, the offense failed to produce points, even though backup quarterback Tom Savage had a career high of 365 yards passing to go along with one touchdown and one interception. Unfortunately, that interception came late in the game when the Texans were trying to make a comeback. “I mean it’s just one of those things. I was throwing it out there, to the outside, and the guy made a good play on the ball,” Savage reiterated after the game.

His career numbers do not tell the complete story or progress he has made since the Watson injury, but it does shed some light on why the Texans offense can’t produce wins. Savage has had five touchdowns and six interceptions in the games he has started this year (6). He has tied a franchise record by losing seven of nine fumbles and has been sacked a grand total of nineteen times.

Head coach Bill O’ Brien stepped to the podium after the game and had to answer the same question that has become a recurring theme when it comes to Savage. What happened on the late game turnover? “I thought we were moving the ball pretty good there, and we called a double move and it just didn’t work out,” said O’Brien.

One bright spot for Houston was the emergence of tight end Stephen Anderson, who was in the game due to another concussion suffered by tight end C.J. Fiedorowicz, his third of the year. Anderson set a single-game career high in receptions and receiving yards. He finished the game with five receptions for 79 yards and one touchdown. “He came up big for us. He made some tough catches and is a good player,” said Coach O’ Brien when speaking about the tight end.

Houston was dealt a bad blow on Sunday with a plethora of in-game injuries. The offensive side of the ball, which was already depleted, lost key components. Receivers Braxton Miller and Bruce Ellington along with running back Alfred Blue left the game with concussions. Cornerback Jonathan Joseph, who is the heart and soul of the defensive backfield, was also lost to a shoulder injury.

The loss to the Titans eliminated any playoff chances the Texans had. Houston’s season record of 4 – 8, can be attributed to major injuries to key players such as Watson, Watt, Mercilus, and Foreman. With four games remaining, it may be time for the Texans to start evaluating some of the talent they have within the organization.

The Texans host the San Francisco 49ers on Sunday at 12pm CST.