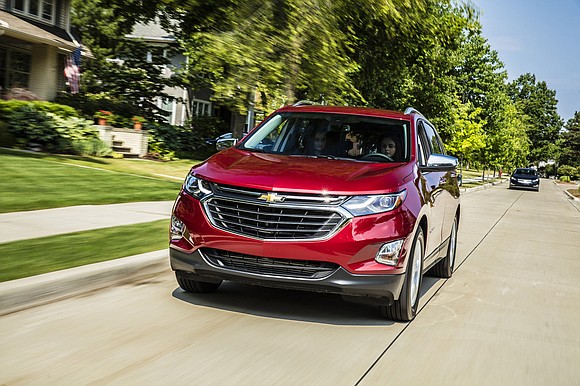 DETROIT – The 2018 Chevrolet Equinox is part of the automaker’s effort to provide smaller but more powerful engines to get better fuel economy.

In the case of the Equinox, that meant it was powered by a direct injected 1.5-liter turbocharged four-cylinder engine. Mated to a six-speed automatic transmission, there was 170 horsepower and 203 pound-feet of torque moving the Equinox on the streets here.

We did a good bit of driving during the week and almost got down to empty. But the 15.6-gallon tank that is on all-wheel-drive models of the Equinox had a reserve and we never felt that we had to gas up. This engine got 24 mpg in the city, 30 mpg on the highway and 26 mpg combined. That’s not bad for a mid-size crossover.

The 1.5-liter turbo generated more than enough oomph to move the 2018 Chevy Equinox smartly. We never felt underpowered, nor did we ever lack enough oomph to get out of the way. But we really didn’t need to avoid traffic as the Equinox ran well with the pack.

The MacPherson strut front suspension and four-link independent rear suspension smoothed out the road. It was equipped with electric power assisted rack and pinion steering which was quick and responsive to driver input.

We don’t know the size of the steering wheel but it felt good in our hands. It was thick but not so thick as to be too big. And this Equinox felt good. It had been redesigned for 2018 model year and had shed some 400 lbs. in the process. That’s a lot of weight even for something as hefty as an automobile. The Equinox was nimble, light on its treads and really easy to drive.

Soft touch material was used on the dash and the doors. It had sort of a saddlebag effect. It looked folded and there were layers and each section had a different texture. And there was also stitching; Chevrolet is getting better at creating premium interiors.

The odometer and speedometer were separated by a TFT screen and the fuel and temperature gauges were above them. The interior was nicely done.

We had the Premier trim line and it struck us that just a few years ago much of the equipment that came with this package was exclusive to luxury vehicles. These days you expect a navigation system, satellite radio, voice controls and Bluetooth.

But there were heated and cooled front seats as well as heated rear seats. Both were power. The steering wheel was heated and the 2018 Chevrolet Equinox was connected. It had OnStar as well as Apple Play and Android Auto. Oh, it was its own rolling Wi-Fi hotspot too.

There was plenty of room in the back seats. They folded and formed a flat cargo floor. We didn’t have to lower them to load four bags for a trip to the airport. We had collision alert, lane departure warning which we turned off, stop/go to save fuel and pushbutton lock and unlock.

Two USB plugs underneath the control pod provided more connections. There was an auxiliary jack and 12V plug as well. Two more USB jacks were in the center console. There was a power liftgate. What’s more, our test vehicle had a panoramic roof.