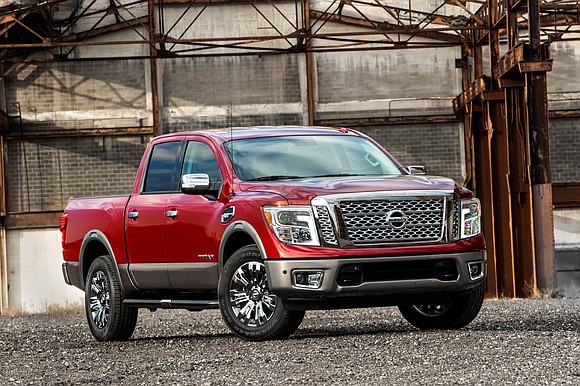 DETROIT – Strictly business is the first thought that came to mind during the week-long test drive of the 2017 Nissan Titan 5.6-liter Endurance V8 SV 4WD SC.

In plain language this was a truck. There was no king cab, no crew cab, there was just a regular cab with an eight foot bed. There were four tie-downs; a bed light as well as under rail LED lights and a step up at the left corner of the rear bumper to step up and to get a better look into the bed to handle cargo.

We had the Endurance trim line. At its heart was a 5.6-liter V8 that made 390 horsepower and 394 pound-feet of torque. It was mated to a seven speed automatic transmission. This Titan had a fuel rating of 15 mpg in the city, 21 mpg on the highway and 18 mpg combined.

We left it in two-wheel-drive since we didn’t go sloshing through the woods, or go off road. We didn’t have anything to tote or to tow either. But if we did, this Titan could carry up to 1,950 lbs. and pull up to 9,560 lbs.

There were no power seats and that made us think initially the truck was a throwback. But it had just the right touch of conveniences for what was needed.

The smart key made getting in and out a snap or should we say a push of the button. In other words, it had push button lock and unlock. It also had push button start and stop. There was a manual tilt and telescope steering wheel.

We thought the blind spot alert was particularly effective since the truck’s bed can distort your sense of how close vehicles are to you or you to them. The Titan was not difficult to drive; a couple of times we cut turns too short and the rear tires clipped a curb here and there but we adjusted.

The Titan looked good but this was a work truck. It had a towing package that included extendable, folding, power, heated tow mirrors with puddle lights, a trailer brake controller and a trailer light check function.

Running boards and grip handles for both driver and passenger made it easy to get into the cab. Once there, we found thick black cloth quilted seats that reminded us of the suspension seats in long haul trucks. They were nice. And there was a six-inch wide shelf behind the passenger seat and the same size tray behind the driver’s seat.

The center console was huge; big enough to set a laptop or other papers on and do some work. There were auxiliary USB and 12V jacks beneath the center stack. Open the center console and find shallow compartments and trays for whatever stuff you might have. And this was actually a 40/20/40 bench seat and what we called the console was actually the armrest. There were also a dual set of cupholders and a column shifter.

And lest we forget, the 2017 Titan looked good. It had chrome bumpers fore and aft as well as chrome door handles. The grille was chrome with painted inserts and front tow hooks. Front and back sensors made parking a snap.

Three was no touch screen inside but there was a five-inch color display screen and a TFT screen between the odometer and speedometer. This Titan was equipped with satellite radio, Bluetooth, streaming audio and Nissan Connect.

This 2017 Nissan Titan offered just enough creature comforts to make you comfortable as you drive to the next job. The sticker was $39,505.