The Real MVP: Who Deserves It in the NBA? 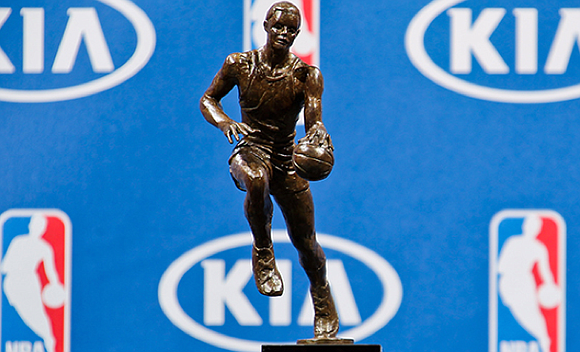 Who will be this year's MVP?

“You sacrificed for us. You the real MVP,” said current Golden State Warrior small forward Kevin Durant who received the Most Valuable Player in the 2013-14 season of the NBA as a member of the Oklahoma City Thunder. Who knew that those words would be the most profound ones of that entire speech? Well, that and the fact he said thank you to Russell Westbrook for always being there for him and he loves playing with him. Two years later. He was gone. That’s another story for another time. As we approach the halfway point of this NBA season, fans find themselves in a bit of a conundrum. Who is the front runner for the MVP award this year?

Is it Houston Rockets point guard James Harden who has led the team to the third best record in the NBA all the while putting up solid numbers (29.1 ppg, 8.2rpg, 11.3 apg)? Or is it the little man with the big game in Boston Celtics point guard Isaiah Thomas? With such a famous name (Isaiah Thomas is a Hall of Fame PG from the Detroit Pistons), he has the task of trying to live up to that hype every night. Thomas has done just that by averaging 10.1 points in the fourth quarter which happens to be the best fourth quarter numbers in the league in the last 20 years. He is also in the top 10 in scoring and has the Celtics threatening the top-seeded Cavs for first place. We could also sprinkle in the usual suspects in LeBron James, Kawhi Leonard, Kevin Durant, Steph Curry, Kyrie Irving, etc. You can’t go wrong with any of these guys and in barbershops all across America, people are making strong cases for all of those individuals. But, we all know that the Maurice Podoloff (name of the MVP trophy) belongs to one player this year. Russell Westbrook.

The powerful, dynamic, and explosive point guard out of Oklahoma City is almost unstoppable this year. As a matter of fact, I think the only person that can stop Russell is Russell. “Mr. Walking Triple Double,” (26 this season) as I like to call him is averaging 31.1 ppg and 10.1apg, but what’s being overlooked by many basketball aficionados is his impressive 10.5 rebounds per game. He is the only guard in the top 20 in this category. That tells you that his no fear attitude usually leads him into the land of the big men (centers and forwards) and more time than not he wins. Westbrook also has an underachieving OKC team currently in 7th place in the very talented Western Conference. Now how long that will last is unknown and if they do slip in the standings it would put voters in a very bad situation. They tend to give the award to a player from a winning team. The only players to win the regular season MVP award from a losing team is Bob Petitt and Kareem Abdul-Jabbar. We may be adding a third name to that list this year. Russell Westbrook. And as I close out this article James Harden and Westbrook has another triple double and Isaiah Thomas scored 13 points in the fourth quarter. The NBA is Fantastic!