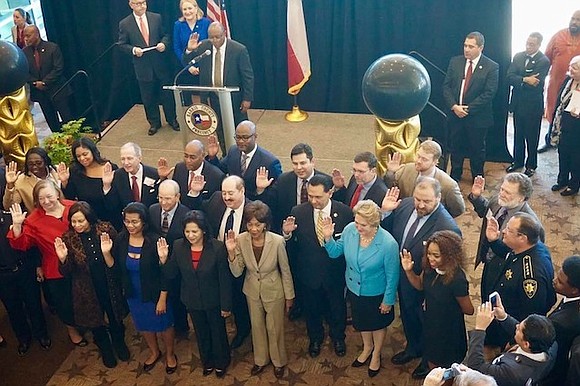 “This is really to say thank you first of all to our voters for having confidence in us and also to those who didn’t vote for us to challenge us to do better,” Ellis told the crowd at NRG Stadium. Hundreds of activists joined him in celebrating an inaugural that included every county-wide contest going to Democrats with votes for President and straight ticket Democrat voting sky high in the county.

“This is an opportunity for all of us to say we commit to you publicly to fulfill the promises we made when we ran. We can do great things in this Precinct building on the legacy of El Franco Lee and throughout all of Harris County,” Ellis said.

Ellis said one of his first priorities is to enact reforms to the County’s criminal justice system with the help of Ogg and Gonzalez.

Ogg earlier in the day had put her hand on a Bible held by her son Jack as her father former State Senator Jack Ogg led her in her oath.

She admitted she was “nervous to fill the shoes of DA.” She said she “remembered the DA’s duty is to hold life and death in her hands for the safety and security of all of Harris County.”

“I just want you to know how proud I am of everyone here. We will do this as one body with the Lord to light our path. I welcome all of you to a new era in criminal justice in Harris County,” Ogg continued announcing reforms including her plan to meet with the police chiefs, the sheriff and constables to encourage diversion programs and not arrest for marijuana use.

Gonzales said thank you, “This has been an amazing campaign. I’ll never forget the friendship, encouragement, dedication, talent and hard work so many have contributed to efforts to get us here today. Now it’s time to move forward together to make our county safer and our system more fair.”