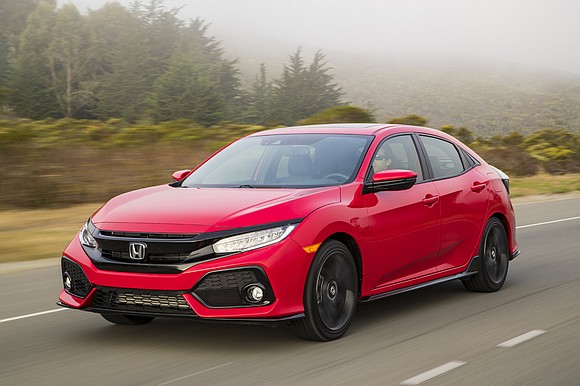 DETROIT – You usually don’t equate sportiness with a continuously variable transmission. It’s like trying to mix oil and water. The two just don’t go together smoothly.

But that is not necessarily so with the 2017 Honda Civic Hatchback Touring Sport. The four cylinder car certainly did have a CVT but it also had a little spunk.

First of all the five-door hatchback was aggressively styled from stem to stern. It had deep air ducts in the front, sleek headlights and a blacked out grille. In the rear it had a centered dual exhaust pipe. From whichever end you were looking at this car it had an aggressive appearance.

It had a 1.5-liter turbocharged four cylinder engine under the hood that made 180 horsepower and 162 pound-feet of torque from 1,700 to 5,500 RPM. That means the Civic Hatchback could catch power from just about any speed.

The hatchback had an EPA rating of 30 mpg in the city, 36 mpg on the highway and 32 mpg combined. Body in white weight was down by 62 lbs. and torsional stiffness increased 52 percent.

We pushed the metal towards the floor a couple of times and the 2017 Honda Civic Hatchback Touring Sport responded nicely. The car was pretty quick. Still, we think the CVT was a bit disconcerting under hard acceleration but at normal speeds we barely noticed it, evidence that the technology is getting better.

That’s what Honda said. That translated into a car that handled really well with a midsized sedan ride. It was quick off the mark and the brakes were solid not spongy. This is the 10th generation of the Civic and it has come a long way from the small putt-putt compact car that it used to be.

The interior was spacious, quality materials were used and the car could carry four adults comfortably. It had more than 25 cubic feet of storage space with the second row seats up.

It had a moonroof, a navigation system, satellite radio, Bluetooth, USB and auxiliary jacks and a 12 volt plug. The black cloth seats were heated and there were power seats in the front.

The 2017 Honda Civic Hatchback Sport is one of the most aggressive looking compacts on the road. It was comfortable, spacious and pragmatic. Best of all was that the car started at $28,300.