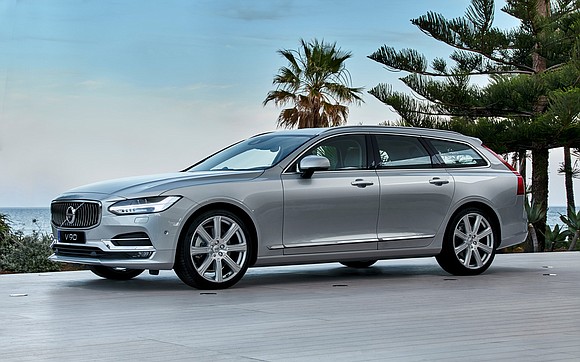 SCOTTSDALE, AZ – Volvo has the kind of problem that the seller of anything would love to have. It can’t make enough of its new 90-Series. The American arm of the Swedish automaker can’t get enough of its top-of-the-line offerings, the XC90 as well as the S90, into this country. Now comes the V90 Cross Country and the supply will surely tighten.

The V90 is a station wagon. But it is a different kind of wagon. It may very well have been one of the earliest crossovers. The car has been around since the early 1990s.

The V90, which can be ordered now, was powered by a 2.0 liter four cylinder engine. The alphanumeric designation is T6. That means the engine has a supercharger and a turbocharger working in tandem.

The combination makes 316 horsepower and 295 pound-feet of torque at 2,200 rpm. This engine was quick and economical. The V90 Cross Country can get from a standstill to 60 mph in 5.8 seconds and it has an EPA rating of 22 mpg in the city and 30 mpg on the highway. That may not sound like much but for a car that weighs two tons and has a four-cylinder engine, it’s not bad. What’s more, it can tow up to 3,500 lbs.

The car had stop/start, it was nerve wracking but we didn’t turn it off. In the cities stop/start can reduce fuel consumption by up to 10 percent.

In its press material, Volvo still calls itself a premium automaker. But from the outside looking in the Swedish automaker has moved into the realm of luxury vehicles. Or at the least, it is redefining premium and setting itself apart from pretenders of that mantle.

The point is that the regular V90, which was not here, can only be ordered online. If you want one, you’ve got two choices: you can go to Sweden and pick the car up at the plant in Gothenburg, get a tour while you’re there, drive around Europe, head to a port and get it shipped home. Or, you can get your V90 shipped to the dealership of your choice.

That was evident on Castle Hot Springs Road which was more rocks than road. It was comprised of twist and turns, mud, rocks, red dirt that seemed more like clay and it had rained that morning. So there were spots where there was lots of slipping and sliding. The speed limit was 15 mph but we were doing 25 mph and the difference was significant.

There was some feeling of steering isolation from the front wheels. The V90 did have electric power steering, but other than that there was no uncertainty in the way the Cross Country handled this road. Overall, the car was quiet but you could hear the engine grunting through acceleration and deceleration as we were going over the sharp rises and dives and the sharp curves of this road. On pavement, the engine was smooth and sonorous.

Our test car was equipped with the $1,950 convenience package. It included heated washer nozzles, 360 degree surround view camera, compass and park assist. On the way back from lunch, we had a V90 Cross Country equipped with the $4,500 luxury package. It included heated and cooled leather seats, a leather dashboard, rear side door sun screens, massaging front seats and heated rear seats.

The car was also equipped with Volvo’s active driver assist system. This was getting close to a self-driving car. Volvo said, “Active Driver Assist is always active, providing stationary object detection with stationary vehicle braking, which sends an audible and visual warning if a non-moving, metallic object is detected in front of the (car). Braking assist will be applied – at speeds greater than 15 mph – when the system recognizes the stationary object as a vehicle, independent of whether cruise control is engaged. The driver will receive a warning up to 3.5 seconds before an imminent impact with the stationary vehicle, and, if no action is taken by the driver, Volvo Active Driver Assist will automatically engage the brakes.”

However it also works when adaptive cruise control and lane keep technology are engaged. The car almost drove itself. Pilot Assist can make gentle adjustments to the steering to help keep the car within the lane markings, all the way up to 80 mph. But Volvo said once you hit a more exhilarating road, you switch Pilot Assist off and take charge. But the car warned us to engage the steering wheel if it was left untouched for eight seconds or more. What’s more, you can conduct some business or just chat somebody up via Skype.

This kind of sophisticated ruggedness is wrapped in sheet metal that was gently curved and alluring. The V90 Cross Country did look good and of course it had the Iron Mark grille which identifies the brand. The interior was sumptuous. There was black pored walnut. The seats were elegant and the interior was minimalist and it was dominated by the infotainment screen which controlled just about everything. And natural light came in through the panoramic roof.

The 2017 V90 Cross Country was an excellent progression of this automotive icon for active families.