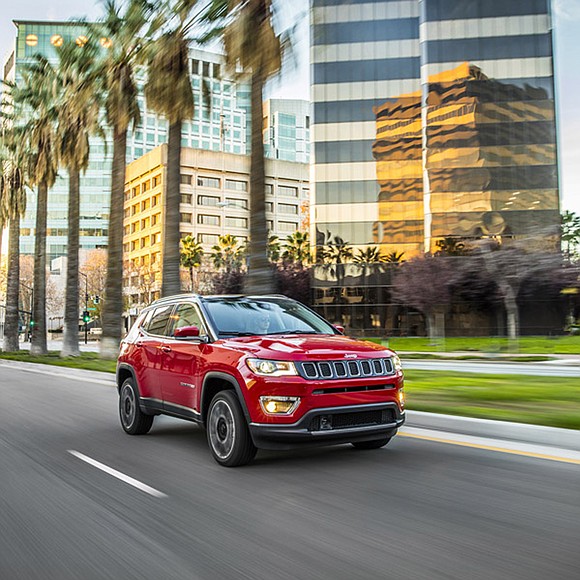 SAN ANTONIO – With the update of the 2017 Jeep Compass, now on sale, every Jeep has been remodeled. That is an indication that Jeep has no intention of resting on its laurels after seven consecutive years of sales growth. In 2010 the brand sold 400,000 copies, last year it sold 1.4 million.

Basically, designers have sophisticated the Compass. It had a wide stance and substantial glass to wheel proportions, as Jeep called it. The slots in the grille had a gloss black field background with thin chrome frames for each of the slots.

The Compass’ roofline was fast; it had muscular fenders and an available black roof. It was a good looking compact crossover utility vehicle with respectable off road capability. After all, it was a Jeep.

Which transmission you get is based on whether the Compass is a 4X2 or a 4X4 model. There are four trim lines: Sport, Latitude, Limited and Trailhawk. Base prices range from $20,995 to $28,995.

This Jeep, like the Renegade, will be a world car. A Jeep executive told us that the Compass will be produced in four plants around the globe: Brazil, China, India and Mexico. And it will be available in 17 combinations, depending on where it is sold.

We jumped into a 2017 Jeep Compass Limited 4X4 with a nine-speed automatic transmission; 19-inch polished aluminum wheels with black pockets and SBW all season tires.

Inside, the new Jeep Compass had a very clean design dominated by the infotainment screen with a trapezoidal bezel. We had an 8.4-inch touchscreen media center. One of the things we liked about the screen which was in color was that in navigation mode, the image was clear and upcoming streets were easily readable and that is important when you don’t know where you’re going or where you are.

Beneath the media center screen was the climate controls and beneath that was the driver select mode, the gear shift and the emergency brake. Depending on the trim line, the drive mode can have up to five settings: auto, snow, sand, mud and rock.

This setup brings us to one of our quibbles. There was a very small storage bin in the center console but that was it. There wasn’t any place to put anything of size, like a cell phone, on the console. However, further back between the front seats there was a covered storage bin that doubled as an armrest.

The dash featured textured soft touch material as well as red stitching. Our tester did not have a moonroof but one is available. And the seats were really comfortable. The cushions were long and that helped lower leg support. Sight lines were good and there was plenty of room for two adults up front; there was no bumping of elbows.

It rained like crazy the night before the test drive. The Compass can fjord up to 19-inches of water and in a couple of places it seemed like it was that high. It wasn’t but there was more water than on traditional test drives.

It would not be a Jeep product launch without an off road course. This one was short and intense. We got the chance to get through some mud and through some uneven deep depressions in the soil that had one or two wheels off the ground and over some sizable rocks that qualified as boulders. The Compass handled the course without much hassle.

On the way to the off road course, we experienced our second quibble. When we turned left onto 288 just outside of Blanco we held the pedal to the metal, literally, and the 2017 Jeep Compass really didn’t get up and go. Acceleration was so-so. If not more horsepower, then certainly a bit more low-end torque would be nice.

Our driving partner thought the Compass a bit bouncy but we didn’t. We both agreed that handling was great. One likable thing was that the compass on the navigation system displayed the direction that we were driving rather than constantly pointing north leaving to the driver to figure out the direction the Jeep Compass was headed.

It had push button start as well start/stop, technology. The fourth generation of Uconnect was employed with its hands free communication, entertainment and navigation features. There was Apple CarPlay that would play Apple music through Siri Voice control, as well as Android Auto, Google Voice Search, Google Maps and Google Play Music.

There was satellite radio, Bluetooth, a CD player, USB and auxiliary jacks as well as a 12 volt plug. There was an eight-way power driver’s seat and both front seats were heated.

The 2017 Compass lived up to its name. In other word’s it upholds the finest tradition of Jeep.