Meet the Class of 2017: Tomorrow’s Future Leaders of America 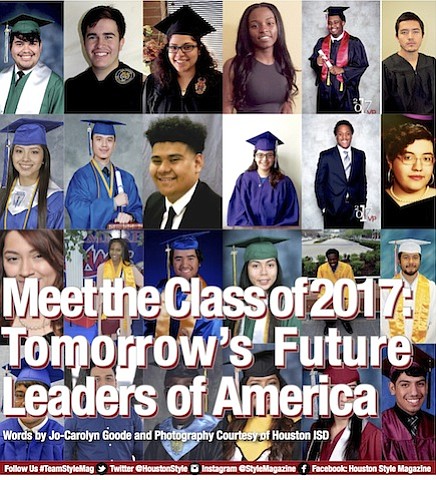 After twelve years, 108 months, 3,240 days, are the estimated number of days students attend school before reaching the pinnacle of their educational career, high school graduation. That pivotal time has come for the class of 2017. It’s time for them to turn their tassel and take the brave steps into the next chapter of their lives. Annually, Houston Style Magazine recognizes the Houston ISD’s African American and Hispanic valedictorians to salute them on their accomplishments. Congrats Class of 2017!

Upon graduation from high school, Santos Flores will attend Carleton College on a POSSE Scholarship. He is undecided on a major. In high school, Flores’ favorite subject was physics. The honor roll student was a member of the National Honor Society and Christian Catholic Club. He loves playing tennis and video games.

Upon graduation from high school, Jed Benedict Eloja will attend the University of Texas at Austin. He will major in computer science. In high school, Eloja’s favorite subjects were Computer science, statistics, and calculus. He was named an AP Scholar with distinction. He was a member of the Debate Club, CyberPatriots, and National Honor Society. His hobbies include reading, Tetris, and TypeRacer.

Upon graduation from high school, Uriel Iglesias will attend The University of Texas at Austin on a UT Longhorn Pre-College Academy Scholarship. He will major in Bilingual General Education. In high school, Iglesias’s favorite subjects were statistics, algebra, and art. The honor roll student is a former Homecoming Prince and Homecoming King. He was named Best Designer of the Robotics team and won Rube Goldberg Competition First Place.

Upon graduation from high school, Marquez Irving will attend Sam Houston State. He will major in business and minor in electricity. In high school, Irving’s favorite subject was English. He already has 30 college credits and was a member of the National Soccer Club. His hobbies are collecting music and playing basketball.