The African American Author Whose Story Became the Movie “The Butler” to Debut New Book About Race, Hope and High School Sports 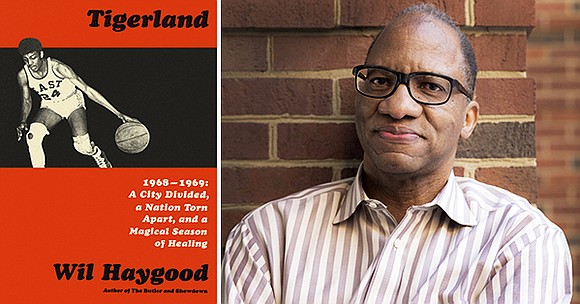 Oxford, OH — Fifty years ago, in 1968, civil rights leaders were killed and social tensions spiked. One of the great untold stories of that year is newly available from the same author whose story became the movie The Butler.

The worldwide debut of Wil Haygood’s Tigerland: 1968-1969, A City Divided, a Nation Torn Apart, and a Magical Season of Healing comes Aug. 24 at Miami University’s convocation.

About 5,000 incoming students at Miami (on three campuses) will receive early copies of the book before the rest of the world. Haygood speaks to students Aug. 24 at the university’s Oxford campus. The public is invited. As part of Miami’s Summer Reading Program, before hearing Haygood the students will have consumed a variety of media from the 1960’s and today.

Haygood, the award-winning biographer of Thurgood Marshall, Sammy Davis Jr., Adam Clayton Powell and others, is a 1976 Miami alumnus.

Tigerland is highly anticipated. It is an inspiring story of two teams from a segregated high school in Ohio who in the midst of the racial turbulence of 1968-1969 won the state basketball and baseball championships in the same year.

Following the assassinations that year of Martin Luther King Jr. and Robert Kennedy, race relations in the U.S. were frayed. But in Columbus, the Tigers of East High School stayed focused, defeating teams from better-resourced schools across the state. The Tigers’ pair of championships was an unprecedented feat in Class AA Ohio athletic history.

Haygood, a Columbus native, remembers seeing the teams play. “The story reached out to me from my past,” he says. “It kept asking me to dig deeper and deeper into the fabric of our nation’s past. Although it’s about winning against stiff competition, it’s also a cultural history of our country.”

“They played most of their basketball games through that cold winter in a converted rodeo cow palace on the Ohio State Fairgrounds, where you could still get whiffs of the horse manure, but no one seemed to mind as the East High Tigers couldn’t stop winning. The gym at the high school couldn’t accommodate the thousands who wanted to see them play.”

“They were poor boys, which into the turmoil of a nation at war and unrest, they were the sons of maids and dishwashers, and cafeteria workers. They were too proud to beg but not to ask or borrow.” … “It was here, up and down Mt. Vernon Ave., that salesmen and saleswomen began at first pinning those pictures of the slain Martin Luther King Jr. to the storefront windows. Then, a short while later, to the same walls and windows, they began pinning portraits of those basketball-playing and baseball-playing boys from the neighborhood.”

A former writer for The Boston Globe and The Washington Post, Haygood penned the story “A Butler Well Served by this Election” for The Post. The article became the basis for the award-winning 2013 film The Butler and for Haygood’s New York Times’ bestselling book of the same name. The Butler was translated into a dozen foreign languages.

In a special arrangement, Haygood’s publisher, Alfred A. Knopf, agreed to a special early delivery of Tigerland at Miami. Others will need to wait until its Sept. 18 publication.