Houston defeats Cleveland and records 9th victory in a row 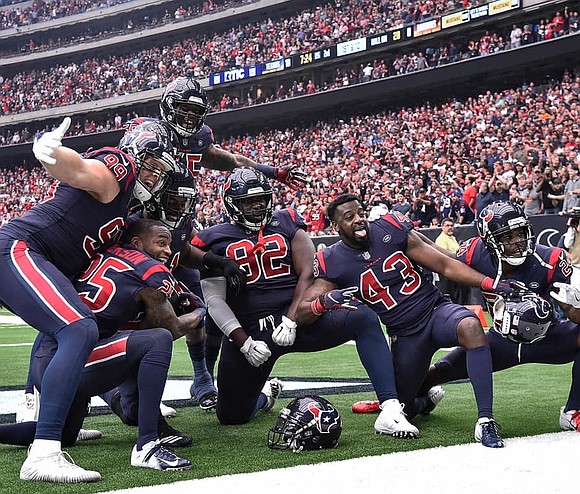 Ok. Stop me if you have heard this phrase before.

For all Houston fans, that phrase should have become very familiar to you over the last nine weeks. This past Sunday, the Texans defeated the Cleveland Browns 29 – 13 to extend their winning streak to 9 games and improve their lead in the AFC South to 3 games. The organization was playing with a heavy heart for the second week in a row. After losing team owner Robert McNair on November 23, 2018, the Texans lost one of their biggest supporters in former President (41) George H.W. Bush one week later. Players and fans stood for a moment of silence as a montage of photos scrolled across the scoreboard at NRG Stadium.

Once the memorial was over and the ball was kicked off, it was business as usual for Houston as they opened up a 10-point lead after a 35-yard field goal by Kaimi Fairbain and a perfect teardrop pass from Deshaun Watson to rookie tight end Jordan Thomas. That pass would have been the highlight of the first half if it wasn’t for Texans LB Zach Cunningham who returned to Baker Mayfield for an interception and touchdown in the 2nd half.

“That was my first pick, my first touchdown in the NFL, so it definitely felt great for me,” said Cunningham as he described the pick-6.

2018 NFL overall No. 1 draft pick Baker Mayfield gifted two more interceptions in the first half to Andre Hal and Jonathan Joseph. The former Heisman Trophy winner (2017) finished the half by going 5/13 for 46 yards and 3 interceptions.

“I keep preaching that if we do the little things right we can be a great offense,” Mayfield said. “We saw a glimpse of that in the second half, but unfortunately, I put us in a deep enough hole into where it didn’t matter.”

Although Houston’s offense didn’t have a stellar performance on Sunday, it did show some glimpse of what is to come down the stretch. Dependable wide receiver DeAndre Hopkins finished the game with 91 yards receiving on 7 catches while running back Lamar Miller chipped in with another 100-yard game. But the offense MVP was kicker Ka’imi Fairbairn who put 5 kicks (a career high) through the uprights in the victory.

“I am just keeping things simple. Taking it one kick at a time. Do what I do in practice in the game,” Fairbairn told reporters after the game.

Now it is back to the drawing board for the Texans as they face the Indianapolis Colts this Sunday at NRG Stadium. Even though the Colts were defeated by the Jacksonville Jaguars (6-0) last week. Indianapolis is not a team Houston can take lightly as they had a win streak of 5-games this year. Actually, it was the win versus the Colts back in week 4 that sparked the nine-game winning streak, but the winning streak is not the primary focus of any player in the Texans organization.

“Obviously you want to keep winning, but you can’t get caught up in the hype, because the moment you get caught up in the hype is when you get smacked in the face. So, what we will continue to do is take it one week at a time and however we win the game we just move on to the next,” said veteran cornerback Jonathan Joseph who has been with the Texans since 2011.