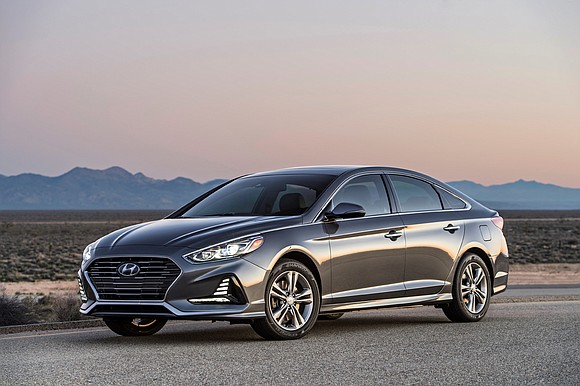 DETROIT – I had the opportunity to attend the launch of Hyundai’s 2018 Sonata last summer in Southern California. I walked away very impressed with the midsize sedan. After a week with the car in urban America I found that my first reaction was correct.

What struck me about the Sonata then and now was its equipment. I had the Limited trim line and it was chock full of creature comforts.

The car had heated and cooled front seats. There were adaptive LED headlights and a hands free smart trunk that opened automatically. There was a smart key with push button lock and unlock as well as push button start and stop.

It had blind spot alert and a rearview camera with rear cross traffic alert. And it had a moonroof.

Acceleration was great. The Sonata was powered by a 2.4-liter four-cylinder engine that made 185 horsepower and 178 pound-feet of torque. It was mated to six-speed transmission and the combination had some spunk.

There was some oomph when I pressed on the accelerator. The car had decent pick up and maneuverability was great. Both were needed coming back from the fitness center every morning in the teeth of rush hour traffic.

The powertrain got 25 mpg in the city, 35 mpg on the highway and 28 mpg combined.

This car handled really well. Cornering was sharp, the suspension smoothed out the road and the steering was precise. It just didn’t take any effort to drive the 2018 Sonata.

The interior was roomy, the instruments were easy to see and easy to reach and for the most part, they were intuitive. I didn’t have to figure out how to work any of the equipment or search for the controls.

This Sonata had a navigation system, voice controls, satellite radio, Bluetooth and blind spot alert. It was a front-wheel drive sedan, there wasn’t any torque steer that I noticed and it was pretty quiet, thus, the build quality seemed solid. The 2018 Hyundai Sonata felt good.

As tested, my vehicle had a sticker of $28,410. I thought it was a well-equipped midsize sedan with a reasonable sticker that did well navigating urban streets.