Getting to the Heart of the Matter: A Look at African Americans Battle with Heart Disease 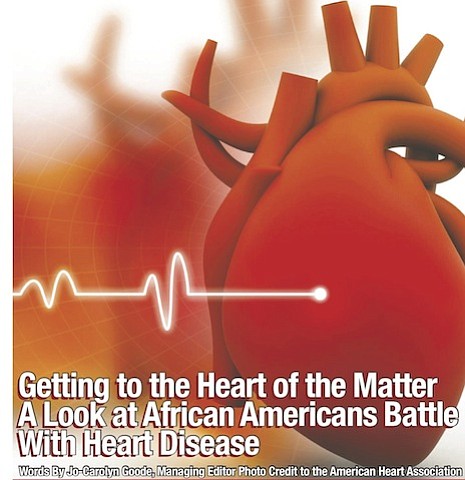 She felt like she has lost all control is how a then 47-year-old Wanda Walton described her bout with heart disease. With her family in tow, Walton was driving when all of a sudden her left side went numb and she swerved the car off the road. When it happened the second time, her daughter knew something was terribly wrong. Walton’s then husband knew too and he sprung into action taking the wheel of the vehicle and made a beeline straight to the hospital while Walton screamed in pain.

After a battery of tests, Walton was diagnosed as having had a stroke. She also found out that the headaches, dizziness, nausea, and blurred vision that she had in prior weeks were ischemic attacks or mini-strokes. Walton always thought she was too young to have a stroke. “That’s for older people,” she said when the doctor had warned her earlier to get her blood pressure and cholesterol down. Not only did her blood pressure and cholesterol put Walton at a greater risk of getting a stroke but also her family history played a role. Both her grandfather and great-grandfather died of strokes in their 50s.

It would be two years of physical, occupational, and speech therapy before Walton would walk and speak again. She never regained feeling in her left side. She walks with the aid of ankle-foot-orthotic leg brace and cane. Plus, she has short term memory issues and feels a pins-and-needles sensation in the cold. Her life changed drastically. But she is not bitter. In fact, Walton feels quite the opposite. With a grateful heart, she feels very blessed. “I believe the stroke had to occur for me to live out my purpose,” said Walton who now volunteers at a local hospital and church to be a role model to stroke survivors and their families.

February is heart health month. As the second largest racial group in the United States, African Americans’ high blood rates have increased by 10% under the new diagnostic guidelines that rate high blood pressure starts at 130/80. The change from the previous rate of 140/90 makes the problem even more prevalent for the population. African-Americans have a higher rate of heart attacks, sudden cardiac arrest, heart failure and strokes than white people

What is heart disease?

Heart disease, as defined by the American Heart Association, includes a number of problems that relate to a build up of plaque in the walls of the arteries. This build up narrows the arteries, making it harder for blood to flow through. If a blood clot develops, blood can be stopped resulting in a heart attack or stroke.

While overall death from heart disease has decreased, African Americans seemed to still be affected at an alarming rate. “We still see higher rates of heart disease and risk factors such as obesity, high blood pressure, and diabetes in African Americans as compared to whites, and higher death rates from heart attack and stroke,” said Mercedes Carrenthon, Ph.D., associate professor of preventive medicine at Northwestern University’s Feinberg School of Medicine and chair of the group that wrote the new statement, published in Circulation.

An estimated 59 percent of all African-American men and 56 percent African American women are now classified as those with high blood pressure under the new guidelines. Many are being diagnosed at younger ages than previous years according to doctors. “Hypertension occurs at a younger age for African-Americans than for whites. By the time the 140 over 90 is achieved, their prolonged exposure to elevated blood pressure has a potential for worse outcome,” said Kenneth A. Jamerson, M.D., a guideline author, cardiologist, and professor of cardiovascular medicine with the University of Michigan Health System.

Prevention is the key to combating heart disease. “It really starts on the prevention end, to maintain a healthy lifestyle so risk factors don’t develop,” Carnethon said. “However, once they do, it’s about taking ownership of your health, understanding the options and managing your risk.” Major risk factors for heart disease are high blood pressure, obesity, and diabetes. Other factors include lifestyle choices, access to healthy foods and exercise, and prioritizing sleep. According to the Jackson Heart Study, which is the largest research project looking at the causes of cardiovascular disease in African-Americans, indicates that African Americans tend to have a higher blood pressure reading at night compared to other races and ethnic groups, and their blood pressure doesn’t drop as it should during sleep.

African Americans can be their own health advocates by checking their blood pressure regularly. If there are changes you can quickly notify your doctor so both of you can work towards controlling it before it gets to the point of you having a stroke or heart attack.

Addressing the obesity problem takes hard work. Eliminating sugary drinks and desserts coupled with selecting wise snacks is half the battle. Winston Gandy, M.D., a cardiologist and chief medical marketing officer with the Piedmont Heart Institute in Atlanta and a volunteer with the American Heart Association, also suggests limiting red meat in favor of lean meats such as chicken or fish and watching portions on carbohydrate-heavy foods, such as pasta and rice. Look for whole grain options instead. Make mixed vegetables the main part of your meal.

Diabetes is treatable and preventable if caught early but most don’t seek treatment when the first signs start to appear. Those who delay treatment may suffer from blindness, amputations, or renal failure. Exercise regularly to strengthen the cardiovascular system and burn calories.

Because of these disturbing numbers, doctors are treating high blood pressure more aggressively to get it under control. Data indicates this method works better than previous ways where doctors would prescribe one drug and up the dose or add other medications to treat high blood pressure. New blood pressure guidelines also indicate which prescribed drugs work better for African Americans. Thiazide-type diuretics and/or calcium channel blockers are best for treating African Americans suffering heart disease. Treating heart disease with prescribed medications is just one way. Others include making lifestyle changes, using devices or surgical procedures.

When you get to the heart of the matter of heart disease you are the most important piece in solving the problem. Take control of your health by knowing and managing your risks, understanding your options, and utilizing preventative measures to reduce your chance of having a heart attack, stroke or suffering some other heart disease.

The American Heart Association provided resources used in this article.