Where Does Society Draw the Line Between Morality and Entertainment? 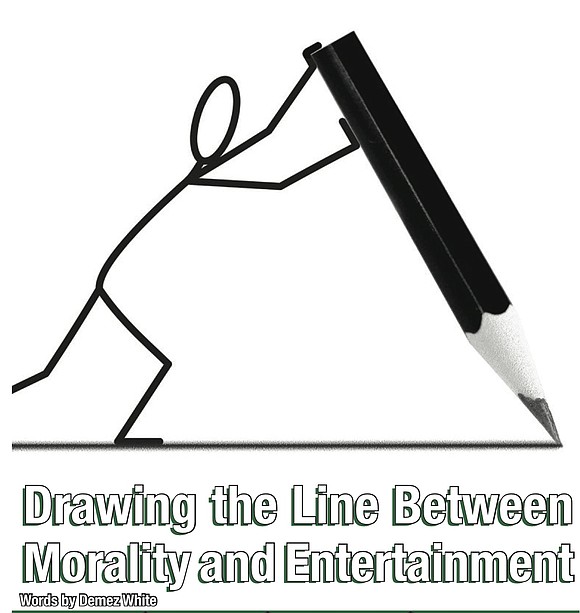 The best books I’ve ever read have been autobiographies. I believe it’s because there is nothing that I or any other writer can make up that’s more entertaining or interesting than real life. A lot of them may read like stories created by writers and a producer but these men and women lived these lives; and as much as we love their music, movies or stories we have to accept that a lot of these men and women were flawed.

Actually, let me not sugarcoat what I really want to say. These men and women weren’t flawed; a lot of them were deviants, criminals, and abusers. But because they came up in an era where social media and cameras weren’t around 24/7 we don’t view them the way we view the flawed men and women of today.

James Brown gave interviews where he was drunk and talked about beating on women. Hugh Heffner was in his 60’s dating women and moving them into his Playboy mansion when they were barely 21. Men of all ages and genres of entertainment have been bad men for a long time.

So why is that now our society is taking a stand against men that prey on or have hurt women? Of course, a lot of this can be attributed to the MeToo movement and women having a bigger voice and platform to speak out on. But I believe it’s more than that. I believe that we as a society are handpicking those men, and in some cases, women, where removing them is comfortable for us.

There is no way that any person with access to the internet can defend R. Kelly. I have read article after article detailing this man’s perversion over the years. He has been accused over and over by young girls for allegedly participating in sexual acts with them. He literally married R&B princess Aaliyah when she was 14 and a video captured what is thought to be him urinating on a young girl. I would have a better chance making people believe Donald Trump wasn’t racist before I could make a good case for why R. Kelly shouldn’t be kicked into the ocean. The problem isn’t whether he’s guilty or not, the problem is where do we draw the line?

Streaming service Spotify recently announced they are removing Kelly's music from all its playlists and algorithmic recommendations. However, they will keep his songs on the service just not promote them to subscribers. Others have been trying to get his shows canceled and tell entertainers to disassociate with him. This movement has caused a female advocacy group, Ultraviolet, to demand the removal of other artists’ music.

Yet as you know, these two men are not the only abusers on your platform. We implore you to take a deeper look at the artists you promote.” Thomas referenced the Spotify’s decision to remove R. Kelly’s and XXXTentacion’s playlists.

Thomas’ letter continued, “Every time a famous individual continues to be glorified despite allegations of abuse, we wrongly perpetuate silence by showing survivors of sexual assault and domestic violence that there will be no consequences for abuse. That has a cultural effect far beyond one individual artist.”

Allow me to refresh your mind on what some of these men have been accused of. Earlier this year a civil lawsuit was filed where three women made claims of being sexually assaulted by Nelly. He denied the claims and the case never went to trial. We are too familiar abuse story between Chris Brown and Rhianna for which he was sentenced to five years probation and 180 days of community labor. Brown made headlines this year when a woman sued him for a sexual assault that allegedly occurred at Brown’s home by one of his associates. Eminem did a 20-month jail sentence after pleading guilty to sexually molesting and groping a woman in 2014.

Xxxtentation, whose music was also pulled by Spotify, has a history since his younger days of being in trouble with the law from everything to sexual assault and robbery but he has never been found guilty for people saying, “I know he did it, listen to his music.”

There is another component to this that is ugly. I don’t think black men and white men are being treated equally after being convicted by the courts or courts of public opinion in the same way for the same charges.

I want no confusion about the tone of this article so let me make this very clear. I don’t believe men like R. Kelly shouldn’t be held to account for the wrongs he’s done. I don’t believe because we aren’t punishing white men that that means we shouldn’t punish him. I believe that all pedophiles and rapists should get the same treatment but it can’t be based on speculations and song lyrics.

Bill Cosby was convicted of three counts of aggravated indecent assault for drugging and sexually and will be sentenced later this year where he could get up to 10 years in prison at 80 years old. The fall out from this has caused his shows to be removed from television play in addition to honorary degrees being revoked, expulsion from the Academy of Motion Pictures Arts and Sciences, and more. I won’t defend Bill Cosby and quite frankly I’m tired of talking about him but I will add one point. Why hasn’t the Harvey Weinstein properties not been pulled from television or streaming platforms? Why have shows of other popular actors that have been accused of and, in some cases, convicted of crimes not been pulled? These are questions that have to be asked, not to defend the guilty, but to protect the innocent.

When it is all said and done each of us has to make a decision about where our morality line is drawn. For some, it’s going to be not listening to certain artists, for others it’s going to be not going to their concerts. But when your favorite song comes on at 6:00 pm as you’re sitting in traffic, are you really going to change the station when there’s no one around? When your favorite movie or sitcom comes on at 2:00 am when you can’t sleep, are you changing the station because the guy that produced it or acted in it did something 20 years ago? Only you can answer that question truthfully.

Where is your morality line?