Almost Doesn’t Count: Texans Fall to 0-3 After Another Slow Start Against the New York Giants 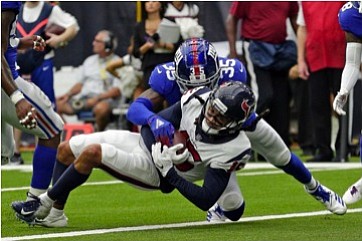 There is an old cliché’ that says, “Slow and steady wins the race.” Although it’s a great cliché if you are running long distance, it does not work in the National Football League. The Houston Texans got off to a terrible first half start and it cost them the game. They lost to the New York Giants 27 – 22 to fall to 0-3 on the season and have a tough divisional opponent next week in the Indianapolis Colts. This is not the way they envisioned their season starting, but they can only take it one game at a time.

“I mean it’s tough, especially when you look back on the three games and realize that we lost those games by a total of 15 points. At the end of the day, on Sundays, the coaches’ jobs are done and it’s time for us to go out there and execute,” said safety Tyrann Mathieu when asked how shocked he was that Houston is winless three weeks into the season.

The Texans were able to jump out to an early lead on the Giants as quarterback Deshaun Watson led Houston on an 11-play 69-yard drive that led to a Ka’imi Fairbairn field goal to put the team up 3-0. New York responded with a 10-play 75-yard drive of their own that ended with rookie running back Saquon Barkley scoring on a 15-yard run to give the Giants the lead and they would never relinquish it.

“We kind of condensed the offense a little bit and made sure guys knew what they were doing. We did a good job of having a good game plan to get the ball out and the offensive line was blocking and we didn’t have mistakes,” Giants quarterback Eli Manning told reporters after the game. 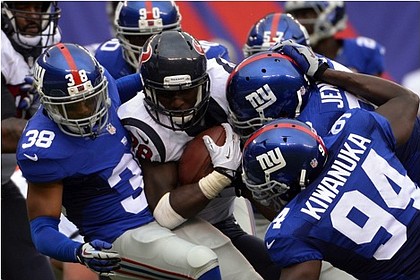 For as bad as Houston’s defense played in the first half by giving up 263 yards of total defense, they were only down two scores at the half. This has become a bad habit the Texans have developed in the first 3 games of the season. Houston has been outscored by a combined 55-19 in the first half of each game and it is causing major concerns for head coach Bill O’ Brien.

“The play calling has been terrible and we got to look at that. I’ve got to do a better job of these guys into a rhythm. We’ve got a lot of good players, just haven’t been able to get them into a rhythm,” coach O’Brien reiterated about the slow starts.

Texans quarterback Deshaun Watson threw for 385 yards and 2 touchdowns to have consecutive games with 300-yards passing and multiple touchdowns (Titans – 310yds – 2 TD’s). Still, that wasn’t enough to lead the Texans to a victory and didn’t make Watson happy after the game. “Every time we take the field as an offense we’ve got to know that we can’t be stopped and go score. We have to stop hurting ourselves,” said Watson, who also threw another interception in his third straight game.

Defensive lineman J.J. Watt took fans back down memory lane in this game by posting 4 tackles, 3 sacks, and 1 forced fumble. It was his first multiple sack game since January 3, 2016, in a win over the Jacksonville Jaguars, but the former all-pro did not want to celebrate any accolades after the game.

“It’s good to finally end such a long drought, and do it in that type of way, but as I said, personal stats don’t matter at all in a loss,” Watt said showing the frustration of losing another close game.

Houston’s road to victory doesn’t get any easier as they face their second divisional foe in the last three weeks. They go to Indianapolis to face the Colts team who has shown some resurgence since getting their starting quarterback Andrew Luck back after sitting two years with an injury. The Texans have not won in the Colts stadium since December 2016, so they have a tough task ahead of them.

If Houston can put together two complete halves, they can get that elusive win that has evaded them the last three weeks. But in order to do that they have to start off like they are in a sprint and not a marathon because, in this league, slow and steady is not a winning formula for success in the NFL.