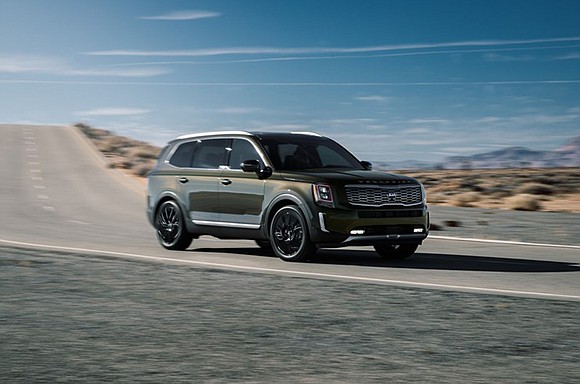 GATEWAY, Colo. – Kia may have hit on the right product at the right time with its all-new 2020 Telluride, a midsize but large three rowed crossover.

We came here to southwestern Colorado to put the Telluride through its paces. We went down Colorado 141 over the Dolores River which cuts through of course the Dolores River Canyon with its 1,200 foot red granite canyon walls. Look beyond and you can see 12,000 foot mountains all round.

Kudos to Kia for picking this place; they could have found a much easier path. C141 is a narrow two-lane twisting affair. We climbed from our base camp, the Gateway Canyons Resort and Spa which was at 5,000 feet up to Telluride (yep, the vehicle is named after the town) which was at more than 9,000 ft.

But I’m ahead of myself. The Telluride is the first SUV designed by Kia in the U.S. specifically for the U.S. market. It was styled in Irvine, California and will be built at Kia’s assembly plant in West Point, Georgia.

It is indeed the company’s new flagship and they wanted it to be bold and boxy; their words not mine. It is the largest Kia ever built and it can seat seven or eight passengers, depending on whether the second row has captain’s seats or a bench seat.

The Telluride had a long broad hood. The design made the tiger grille wider and taller. Dual headlights were stacked; it had inverted “L” taillights with LED stripes. The windshield was upright and the sides were smooth but bulging and that conveyed strength. And there were elongated nameplates on the edge of the hood and on the lip of the liftgate.

This Kia was the real deal. It had skid plates with twin exhaust tips that let you know it can go off-road. Grab handles were integrated into the center console for such occasions. I passed up the off road course in favor of pushing back to basecamp.

This engine is why I first thought they could have picked a better place for the Telluride’s national launch. Any engine will lose horsepower with altitude, especially if is not getting forced oxygen as in turbocharger of supercharger. A couple of times the Telluride’s engine worked hard as we climbed a particularly steep stretch of road. But to be fair, on a straightaway with enough distance, and there were not that many, the pedal got pushed to the metal and our Telluride got up to 120 mph before we let up. Power test passed!

And while I’m at it, the Telluride’s handling was spot on. I thought steering was a little loose but the sport utility went where we pointed it without a lot of deviation. What’s more, for a vehicle that weighed more than two-tons, the suspension prevented a lot sway and yaw.

My point is the Telluride was rock solid on the road. There wasn’t any body roll that I remember, the nose didn’t rise up under hard acceleration nor did it dip during hard braking. There was a lot of that as we came up on curves sooner than expected.

Its cabin was wide. There was no center stack. Kia was one of the earliest automakers to emphasize horizontal interior layouts. And it really looked good in the Telluride. Plush leather seats were comfortable and the wood and metal trim which looked great and had some grainy texture wasn’t wood or metal. It was a proprietary process that really worked.

The new Telluride comes in four trim lines: LX, S, EX and SX and they all can be equipped with front-wheel-drive or all-wheel-drive. Its chassis was comprised of 59.4 percent high strength steel and that no doubt was one of the reasons for its rock solid road performance.

There was a choice of four drive modes: smart, eco, sport and comfort which modified the settings for the powertrain, drivetrain and steering. In addition to the four regular drive modes in FWD, Kia said the AWD model owners can opt for snow and AWD lock too. Drive on demand will distribute torque between front and rear wheels depending on driving conditions.

Got to report that the navigation system in the first Telluride we tested did not work. These were early production models, thus, they were ready for sale. We swapped with an internal who got the system to work by rebooting it. I don’t know what that took but all I can say is that it is not unusual for a computer to need rebooting but it’s not good either. The competition is way too good for even minor glitches; that’s Kia’s challenge with the launch of the Telluride which is currently on sale; don’t get tripped up by the small stuff.

The automaker has stocked the Telluride with a bunch of creature comforts and driver as well as safety assists.

Blind spot collision avoidance assist will track lane changes and if it detects a vehicle in the Telluride’s blind spot will apply brakes to the front wheel on the opposite side.

Rear cross traffic collision avoidance will also apply brakes to avoid a collision, lane following assist will keep the Telluride in the center of the lane and safe exit assist, if the system detects an object approaching from the rear, will override attempts to deactivate electronic child safety lock until the detected object has passed.

The head up display has been made more informative; it will provide turn-by-turn navigation, speed, and smart cruise control and blind spot warnings. But polarized sunglasses will still wash it out.

The rear occupant alert uses ultrasonic sensors designed to detect child or pet movement in the second or third row after the Tellurides doors have been locked. It can issue audible alerts to the driver.

The list of creature comforts is long. A 10-inch infotainment touch screen, 10-speaker premium audio system, surround sound system, Apple CarPlay and Android Auto, a half dozen USB charging ports, and a Bluetooth system that allows two phones to be connected for audio streaming are included.

There was UVO, Kia’s control system for remote start and door lock pre-conditions the cabin temperature, seats and steering wheel before you get in the car.

If the driver does leave someone in the back seat, the vehicle will alert the driver through a cluster message, then through vehicle alarm and then it will send a message to the owner’s smart phone.

Kia said the 2020 Telluride is the largest SUV in its class at 197 inches long with a 114.2 inch wheelbase. It can be shod with either 18-inch or 20-inch wheels. The sculpted rear fascia camouflaged the skid plates nicely; there was 87 cu. ft. of cargo space with the second and third row seats folded and a low and wide cargo door.

They’ve thought of little things like the heated and cooled second row seats and the third row seat backs tilt.

Kia has got the right vehicle to muscle its way into the large midsize utility market. And buyers seem to agree. The Telluride was accounting for 40 percent of the automaker’s web traffic and they had already sold about 2,000 models; that was weeks ago.