With The 23rd Pick in the 2019 NFL Draft the Houston Texans Select: Tytus Howard 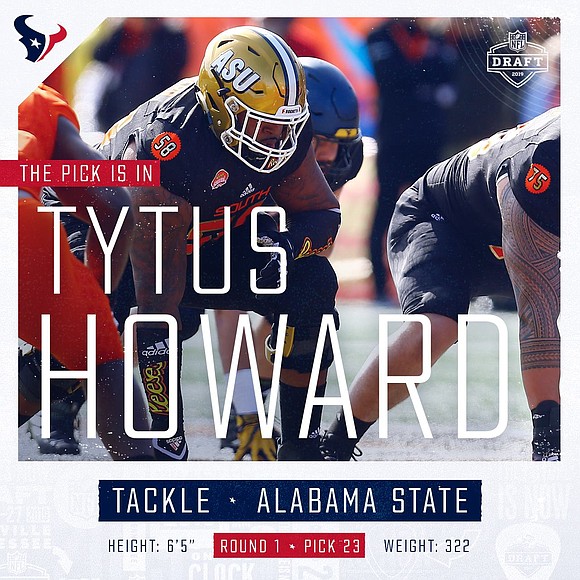 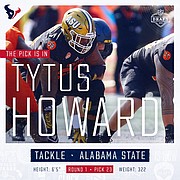 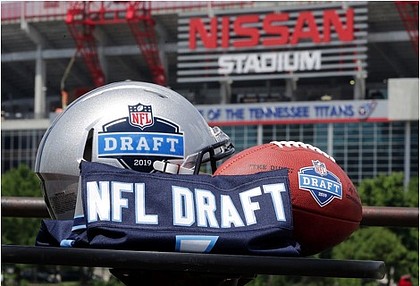 "Our scouts were on him as early as August," said Texans General Manager Brian Gaine as he addressed the media after the completion of the first round of the 2019 NFL Draft. Houston selected offensive tackle Tytus Howard out of Alabama State with the 23rd pick and Howard was elated about the team giving him an opportunity to play on the next level.

"It's just an unbelievable feeling right now. I'm just blessed to be a part of the Houston Texans, a great organization. I had a good feeling about the team when I went and did my visit. They decided to draft me, and I promise they did not make a mistake," said Howard who can play all positions on the offensive line, but Tackle is his specialty. 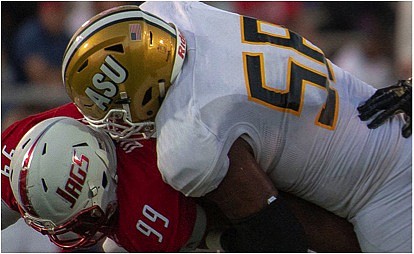 Howard started all 11 games for the Hornets last season and led the team in pancake blocks while only giving up one sack. He was also an intricate part in helping his team defeat Alcorn State University who went on to become the 2018 Southwestern Athletic Conference (SWAC) Champions.

"Tytus is team guy. Not only did he switch to protect his backside, but he went in on defense to help get pressure on kicks. He is a program guy, he loves this program, he loves the guys he plays with. It shows, and those are the kind of guys we want," Hornets Head Coach Donald Hill Eley said after the victory.

The SWAC all-conference player who currently stands at 6-5 and weighs 322 pounds impressed Texans scouts at the Senior Bowl and at the NFL scouting combine. After running a 5.05 in the 40-yard dash, he bench pressed 225 pounds 21 times. That alone caught the eye of other scouts and created a buzz around Howard. But it wasn't just the physical attributes that impressed the Texans coaching staff. It was his sit downs with Gaine and Head Coach Bill O'Brien that let Houston know that if he was still available at number 23 they were going to draft him. 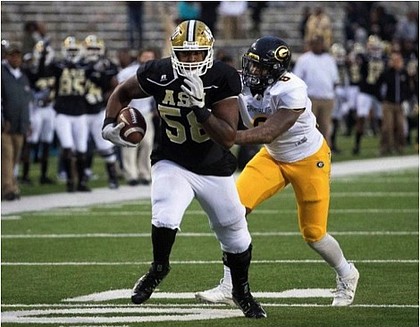 "He goes to the combine and excels. Did very well in the interview process, the private settings and the pro day settings. I felt like with each interval he was able to pass each segment with flying colors. The character matched with the physical ability and physical traits. We felt like he checked all the boxes," Gaine said after being asked what impressed him the most about Howard.

Footwork and agility is the one thing that coaches look for in an offensive lineman and the FCS second team All-American has those skills. Howard was a quarterback in high school and was recruited by ASU as a tight end. He developed himself into one of the best run and pass blockers in the nation and looks forward to protecting the Texans franchise quarterback in Deshaun Watson. 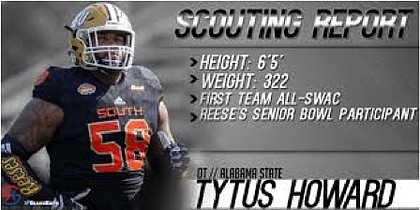 "He is one of the best quarterbacks," Howard said of Watson. "Me being a tackle with my athleticism, I feel like I can protect him longer.

Howard took great pride in becoming the first player from a Historically Black College or University (HBCU) to be selected in the first round of the NFL Draft since Tennessee State’s Dominique Rogers-Cromartie in 2008 and the first in Alabama State history.

"It's just so special to me to represent HBCU schools and the SWAC. To show that you can have players come from the SWAC and be just as good as the SEC and ACC. So, for me to become a first-round pick, I am going to make the most out of it so guys in the future will have a chance to get looked at like I did," said Howard when he was asked how happy he was to be selected from an HBCU.