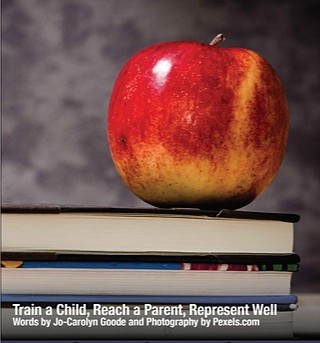 Proverbs 22:6 states, “Train up a child in the way he should go, and when he is old he will not depart from it.” Either today’s generations missed a lesson or two or never learned it all but the lesson of knowing how to represent yourself well publically has been lost. Gone are the rules for wearing what is right. It is all about being comfortable, sexy, convenience and wearing whatever one feels like regardless of the place or occasion. One Houston principal has had enough of the low bar some people have for themselves and is making sure that not only the students but their parents as well have standards, high standards.

Carlotta Outley Brown is the new principal at James Madison High School. The award-winning principal is known for making headlines for her stellar leadership in making children successful in the classroom involving staff, parents, and the community. Now, Brown is expanding her lessons to include parents in learning a little decorum with a new dress code for all parents and visitors to the campus.

“We are preparing our children for the future and it begins here,” Brown stated.

Growing up those types of lessons began at home. Three generations taught and showed me the ways to be a lady, the value of respecting one’s self and representing not just yourself but your entire family. First, it was my great grandmother, Corine Wright or as I called her CoCo, who always made sure every hair was in place and every crease was sharp before she stepped out. She wore her Sunday’s best every day of the week. Then there was my grandmother, Lillie Mae Maddox, who even in her uniform had her face fully made up, wig in place, and her jewelry on. When the weekend came she pulled out the real threads. This lady of grace even ironed her undergarments. And lastly, there was my mother, Beverly Jean Maddox, with her biweekly hair appointments and flowy wardrobe. I watched her daily wake early to apply makeup and secure her signature style. Although she instilled me the lesson of not going out of the house any kind of way, I just could not adopt the application of daily makeup. I would rather sleep. (remember how I mentioned convenience earlier) I can remember each one of them saying, ”When you leave this house you are representing me and we represent well.” These are the ladies of generations that never would be caught wearing something too short, too tight, too revealing, to anything that wasn’t appropriate for outside the home.

Over the years the mindset of dressing appropriately has become more and more relaxed. No longer are we dressing up on Sundays in our finest. Jeans and tennis shoes have become commonplace. When an event calls for business attire, folks show up wearing business casual. Before you think it is because they can’t financially afford business attire, a lot of times it is because they don’t know what business attire is or what it looks like. The difference between formal and cocktail are terms used interchangeably. This mindset has dripped down to our schools where some teachers are more casual in their attire opting for casual attire like jeans instead of business casual and business attire. And some parents show up to the school wearing Daisy Dukes and mid-drifts with headscarves or slagging pants exposing their boxes with an undershirt. Blame it on the influence of social culture, environment, lifestyle changes, and other factors but a big change has occurred. And it is hurting us as a society.

Because our value and pride in ourselves have diminished we have become lazier and expect less of our children and a little bit of ourselves. We are losing the values of what comes with representing well like self-respect, working hard, and taking risks to succeed. Instead, we are shortchanging ourselves and looking for the easy way to achieve. Our children begin to idolize the Kim Kardashians of the world more than they look to the Michelle Obamas of our time.

Brown has never wanted that mindset for her children. She works daily teaching them the lessons they need to excel professionally and personally. Values that when you look good, you feel good, and you do well. You expect more for and of yourself. You push yourself harder to achieve more and the results are that you do get more. But these lessons can’t just be taught at school but in the home as well.

In a letter to parents, Brown stated, “to prepare our children and let them know daily, the appropriate attire they are supposed to wear when entering a building, going somewhere, applying for a job, or visiting someone outside the home setting” she was going to issue certain guidelines on attire for parents and visitors to the campus. Guests will be turned away from Madison if they come wearing a bonnet, pajamas, revealing tops, jeans torn from the buttocks, sagging pants, Daisy Dukes, dresses up the behind, among other items on the list. Violators of the new dress code will not be permitted inside school buildings until properly attired and can be forcefully removed if need be. Brown’s Madison High was recently in the news for turning away a parent trying to enroll her child in school wearing a t-shirt dress and a scarf on her head and for having that same parent removed when she refused to leave the campus. The parent demanded to see the policy on the parent dress code. She, however, was not shown the policy and called the media.

Like this parent, others have voiced their displeasure with the rules for parents’ attire calling it insulting and demeaning. But there are more supporters than naysayers. Many parents, school staff, and community members applaud Brown for her bold leadership to bring this measure to the school. Some have even called for this to be a policy that is spread district-wide.

Shaketha Mikel, a mother of three as well as a school administrator (not associated with Madison High School), is in support of a policy like the one Brown has presented. “As an educator, I set the tone and expectations for what I'd like to see in the school setting. As a parent, I model for my children how the school and community view us in society. I am the best example for my children. They are reflections of what their father and I pour into them.”

Another parent (not associated with Madison High School) expresses similar favor for the policy. She does have concerns when it comes to the legality and censorship of the rules on people’s rights. “Some people don't like locs and braids…can we say folks can't wear those styles either? Censorship can become a slippery subjective slope,” said Camellia McKinney.

McKinney raises a good point. Although the policy may be offensive to some and does infringe on people’s rights, it is still legal. In an investigation, KHOU reported, “Texas law and state supreme court decisions give school administrators authority to set rules and discipline.” Furthermore, Houston ISD also gives principals the authority to do the same on their campuses. With this being said the policy still can be challenged.

Outrage over those not wearing the proper clothing is not a problem isolated to Texas. Tennessee State Representative Antonio Parkinson has proposed legislation for a code of conduct for visitors to educational campuses to follow. The bill regulates what visitors can wear to campuses and forbids them from being intoxicated or high on campus.

Personally, I think it is beyond time for something like this to have happened. Although I understand the parents point about the protection of their rights, I must side with the principal. If students must adhere to a dress code and a standard of professionalism why not parents and visitors that their young eyes are looking to for guidance. Parents and anyone coming on to an educational intuition need to be decent with their attire when coming to a school. Now, where I will give parents a pass on is if you are in the carpool lane and are not getting out of your car. If you roll out of bed to pick up or drop off at least brush your teeth, wash your face, and look presentable from the waist up. We must be examples of what to do for our children to be the best than be. Being the best starts with how you present yourself. Step it up to go up to and represent well.