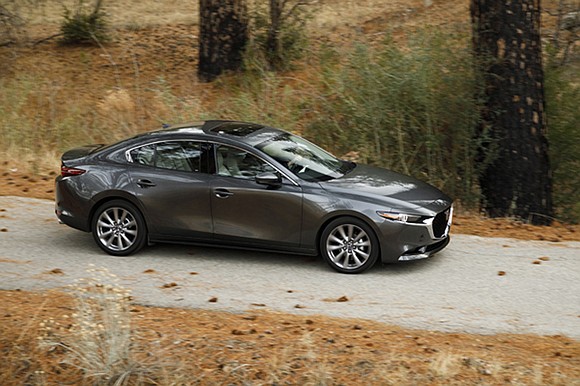 DETROIT – Mazda continues to evolve its Kodo design language and the results are impressive. We didn’t think it possible but the 2019 Mazda3 sedan looked longer, wider and lower.

It took its design cues from Mazda’s Vision Concept which was first shown at the Los Angeles Auto Show a couple of years ago. Some aspect of the design made into the production car and others did not. But overall the Mazda3 sedan is the first production model which has taken on the new look that Mazda called a matured Kodo design language: a lower hood, a more refined cabin and a shorter rump which concealed a huge trunk 13.2 cu. ft. which expands to 20 cu. ft. with the back seats folded.

Under the hood was a 2.5-liter four-cylinder engine that made 186 horsepower and 186 pound-feet of torque at 4,000 rpm. Yes, the engine is a carryover but if it ain’t broke don’t fix it. The four-cylinder was mated to a six-speed transmission with manual shift capabilities and paddle shifters. And lest I forget, the Mazda3 Premium Package had cylinder reactivation.

The Mazda3 sedan featured standard G-Vectoring and all-wheel-drive. It got 25 mpg in the city, 33 mpg on the highway and 28 mpg combined. This engine always sounds a little wimpy when it starts up but once it comes to life it has more than enough oomph to get the job down. Mazda said the top speed is 130 mph.

It was a snappy snazzy little sedan that got a lot of attention because of its styling. Handling was precise, acceleration was good, the suspension was up to the challenge of city roads and it confronted the ends and outs of urban traffic with no problems. LED headlights and taillights are now standard.

The suspension used MacPherson struts in the front and a newly developed torsion beam setup in the rear. The internal structure of the bushings adopted a new spherical shape and updated suspension geometry to help realize lag-free transmission and linear action. The car was smooth running and riding.

Inside is where designers really upped the quality and the style of the Mazda3. They set the infotainment screen back atop the dash/. It is still a floating fixture but it was too far back to be reached with ease. Thus, it is no longer a touch screen.

This was part of the only complaint that we had with the Mazda3. There was a premium audio system. But despite the aluminum grille that covered the speakers it seemed impossible to simply change the radio station. We prefer to think that aspect of the system malfunctioned because it just didn’t make sense.

Anyway that was the downside to a really premium interior that had an ambience of calmness. The controls had been simplified and were either on the steering wheel or the center console. The climate settings were in a small island on the lower half of the dash. It also held the switches for the heated front seats. It was a very clean and sophisticated look.

The interior was awash in soft touch surfaces, especially on top of the dash. The 2019 Mazda3 sedan had automatic lock and unlock that went along with push button start stop.

In front of the driver were three instruments with the speedometer being in the middle. The odometer was to the right and the ring on the left held the fuel and temperature gauges and the. The speedometer held a TFT screen which displayed information in the center.

There was a USB jack low on the lower half of the dash and another one as well as a 12v plug inside the center console. There was also a wireless charging pad for a smart phone.

The driver’s seat was power and it was awfully comfortable by simulating the feel of a deep bucket seat. There was a moonroof and a black piano template covering the center console which held the gear shifter and the circular mouse for the infotainment screen as well as controls for the audio system.

The back seats were snug for three people but there was plenty of room for two people. Head space was good, there was a good bit of leg room for a compact car and the seats were comfortable.

Of course there was satellite radio, a navigation system, voice controls, Bluetooth, Apple CarPlay and Android Auto. For $29,415, the 2019 Mazda3 Sedan was a well-equipped good looking package.