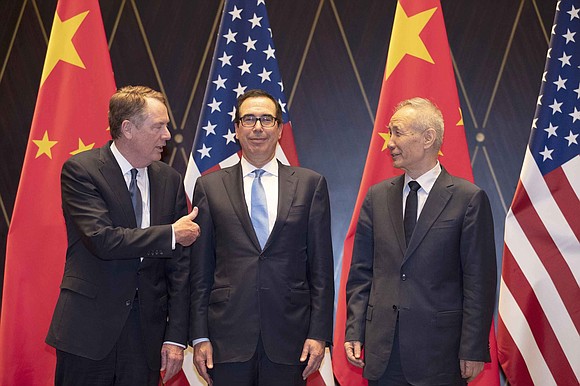 President Donald Trump on Monday accused China of "currency manipulation," shortly after Beijing struck back with its own retaliatory action as the trade war continues to escalate.

(CNN) -- President Donald Trump on Monday accused China of "currency manipulation," shortly after Beijing struck back with its own retaliatory action as the trade war continues to escalate.

Responding to Trump's threat on Thursday to levy a 10% tariff on $300 billion of Chinese goods, China allowed its yuan to fall to its weakest level in more than a decade and asked state-owned enterprises to suspend imports of US agricultural products.

Stocks opened sharply in the red with the Dow falling 500 points as investors saw no end in sight to the long-standing trade war.

The move prompted Trump to call out China over "currency manipulation," while nudging the Federal Reserve that the yuan's low level is a "major violation." It's the responsibility of the Treasury Department to label US trading partners for meddling with their currency, which the Trump administration has stopped short of doing so far. But it appears that Trump is hoping the yuan's depreciation will push the Fed to cut rates even lower.

In late May, Treasury declined once again to label China a currency manipulator, despite Trump's pledge to do so during his 2016 campaign. Instead, the country was placed on Treasury's "monitoring list" in its review of US trading partners along with eight other countries.

To be fair, Treasury's report highlighted "significant concerns" over the meaningful depreciation of China's currency against the US dollar, a critical component of ongoing trade talks, and urged China to take steps to avoid "a persistently weak currency."

Trump has repeatedly argued that the Chinese have depreciated their currency slowly in the last year to help offset tariffs on billions of dollars of Chinese goods amid an ongoing trade war between the two major economic superpowers.

Economists generally agree that the weaker currency -- whether by design or not -- has softened the blow of tariffs on China by making its good cheaper. But it's also raised the risk that the trade dispute could spiral into a currency war.

The People's Bank of China Governor Yi Gang said in a statement Monday that China won't use the yuan as a tool in its trade dispute with the US.

"I am fully confident than the yuan will remain a strong currency in spite of recent fluctuations amid external uncertainities," Yi said.

Trump last week abruptly escalated trade negotiations shortly after trade talks had resumed by proposing a third tranche of tariffs that would go into effect September 1. He's also threatened those tariffs could even go up to 25% -- or even higher.

The new tariffs could hit US consumers harder than the earlier rounds. It would tax goods like iPhones and other consumer electronics, sneakers and toys. Last year, Trump imposed tariffs on about $250 billion in Chinese-made goods, targeting industrial materials and components.