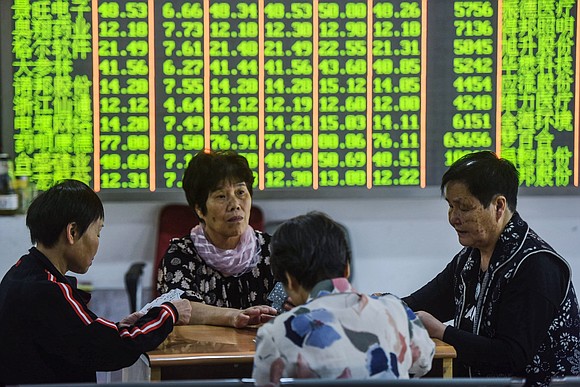 President Donald Trump sent shivers through global markets on Monday, with stocks plunging after he threatened new tariffs that would escalate the US-China trade war.

(CNN) -- President Donald Trump sent shivers through global markets on Monday, with stocks plunging after he threatened new tariffs that would escalate the US-China trade war.

The Shanghai Composite plunged 5.6%, while Hong Kong's Hang Seng fell nearly 3%. The Stoxx Europe 600 index dropped about 1%. Oil futures dropped to their lowest level in a month before recovering.

That set US markets up for a rocky start. The Dow dropped 450 points at the open before recovering some of its losses.

Trump renewed threats to raise tariffs on Chinese goods over the weekend, a threat that could derail a round of trade talks with Beijing scheduled to start on Wednesday.

The Wall Street Journal reported that Beijing was considering pulling out of negotiations. A spokesman for the Chinese government said on Monday that a delegation was still preparing to go to the United States.

Tao Wang, an economist at UBS, said the threat from Trump was a "big surprise" following weeks of positive developments on trade. It's not clear, she said, whether the threat was a shift in position or a negotiating tactic.

"For now, one thing is almost certain: financial markets will react sharply to the suddenly increased risk of a full-on US-China trade war," she said.

Trump warned Sunday that he would lift tariffs this Friday on $200 billion of Chinese goods to 25% from the current 10%. He also warned he would tax nearly all of China's exports to the United States.

Trump said that he believed talks were progressing too slowly and the additional tariffs could be applied "shortly."

The sudden escalation caught investors badly off guard. Not only had US and Chinese officials signaled a trade deal was imminent, but hopes for trade peace helped drive US stocks sharply higher this year. Global economic growth remains fragile and could be hurt by a new outbreak of hostilities.

The grim opening for US stocks on Monday followed a week of records.

The Nasdaq closed at a record high of 8,164 Friday, and the S&P 500 was near an all-time high set earlier in the week. The Dow had been closing in on its record high set in October.