Texans head coach Bill O’Brien gave his players a much-needed break from the heat today as they practiced inside the bubble for the first time in over a week. Although the temperature wasn’t as hot on the inside, the competition and drills were. Here are a few of my observations from Texans training camp day 13.

The one position that does not get a lot of headlines every day is the punter. Most fans can’t name the punter on their favorite NFL team, but there is one of the Texans who is trying to make himself known and that’s Bryan Anger. He was released by the Tampa Bay Buccaneers earlier this year after three seasons with the team. Currently, in a battle for the starting position with the second-year punter, Trevor Daniel, Anger applied more pressure today during the special team’s portion of practice. His punts hit the top of the bubble four consecutive times today halting the return team from making any plays. That type of power and hangtime will be just what the Texans will need to dominate field position in games.

"It's been really good. I think it's brought both of those guys levels of play up a little bit because they've got to bring it every day because the other guy is going to bring it. You've got two guys that have punted in the NFL, so may the best man win," said special teams coordinator Brad Seely when asked about the competition between Anger and Daniel. 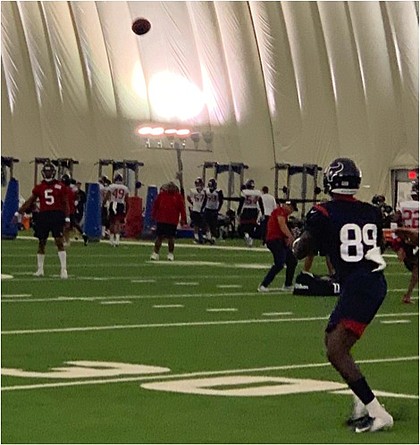 The Texans welcomed back tight end Jordan Thomas to practice as he was on the field for the first time in over a week after suffering a minor hamstring injury. Houston’s medical staff wanted to make sure that he was fully healthy before returning to practice. His excitement showed on the field today as he ran over cornerback Jermaine Kelly Jr. who he outweighs by 70-plus pounds during 7-on-7 drills. That brought a smile to coach O’Brien’s face, but he also let Thomas know that the play would be flagged as a penalty in the game

Thomas has been witness to the ongoing battle for playing time at his TE position with the emergence of veterans Jerell Adams and Darren Fells. Texans tight ends coach Will Lawing loves the competition and depth he has at his disposal right now.

Things got a little intense today between veteran linebacker Whitney Mercilus and third-year offensive tackle Roderick Johnson who was picked up by the Texans after being waived by the Cleveland Browns earlier this season. Johnson was filling in for Matt Kalil who sat out practice today due to rest. During drills, Mercilus and Johnson were matched up against one another and they battled well after the whistle on a lot of plays. It was good to see that type of competition in practice as Johnson caught the eye of a couple of offensive coaches during practice. 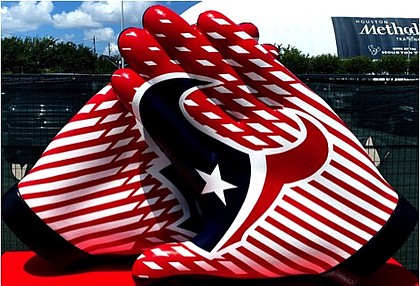 Linebacker/Defensive End Jadeveon Clowney was the talk of the press conference as the Texans assistant coaches were made available to the media after practice. Most of the questions were asked to the staff on the defensive side of the ball. All the coaches said they would love to have him in camp, but they understand the business side of the football as well.

Clowney’s position coach, Anthony Weaver said that he checks on him regularly just to see how he is doing.

"We've exchanged texts really just to check in on him, see how he's doing,” Weaver said. “I've been out a year. I know that's not the plan, but I know how difficult that is just to not be around the guys and be in this environment. This is what you've done your entire life. So, most of that communication has just been to check on him."

Texans will resume practice on Wednesday in a joint session with the Detroit Lions.