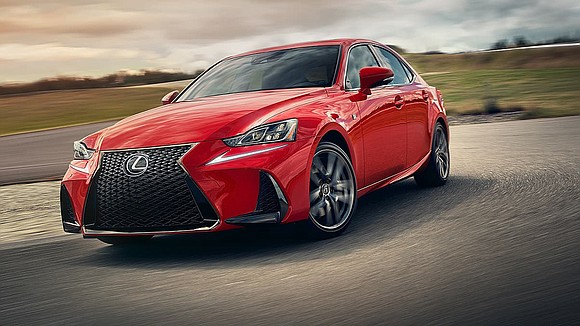 DETROIT – The Lexus IS was one of the first models from the Japanese luxury brand that demonstrated it was serious about changing its image.

Don’t get it twisted. From its start, Lexus always produced first rate products. But they were known for their reliability and quality more so than for their styling. That all changed with the IS.

The spindle grille was in full bloom on this car. There were striking headlamps, large air intakes in the front bumper and accent creases on the side that made the compact sedan seem like it was hugging the ground.

The hood had a raised center point indicating the power underneath it. LED headlamps were standard, and it had L-shaped LED daytime running lights. On the IS F Sport, which is the model we had, the grille had a three dimensional F-mesh pattern

Under the hood was a 3.5-liter V6 that had been tweaked up to 311 horsepower and 280 pound-feet of torque. It was mated to a six-speed automatic transmission with paddle shifters.

In addition to its looks, the IS 350 that we tested had all-wheel-drive and handled like the sports sedan that it was. Acceleration was better than average, the car managed the ends and outs of urban traffic without a hitch and the multidimensional suspension smoothed out the roads.

The interior was inspired by the brand’s LFA supercar which is no longer in production. There was NuLuxe trimmed seating, 10-way power front sport seats, a high-efficiency dual-zone automatic climate control system with touch-sensitive controls, power moonroof, and what Lexus has branded SmartAccess with pushbutton start.

The climate-control panel, analog clock and steering wheel switches in the black interior were enhanced with stitching. The speedometer and tachometer, as well as the stitching atop the gauge hood, gave the cockpit an austere but sporty feel.

The car had the Lexus Remote Touch Interface (RTI) multi-function control device. The RTI is the go-to control for the audio system, driver’s phone, navigation system and more. In essence it is your basic mouse. It was available in conjunction with the navigation system; there was an 835 watt 15-speaker premium sound system. “Enter” buttons on either side of the RTI on the center console helped make the system easier to use, as did a larger leather-wrapped palm rest.

During our week-long test drive, family matters took us to New England where we landed in Boston, picked up a Lexus ES 350 Ultra Luxury sedan and motored to Providence, RI.

First we were taken aback by the luxury appointments of the midsize sedan’s interior. It was beige leather, accented by blond wood trim and a 14-way power driver’s seat and 10-way power front passenger seat with lumbar support and cushion extensions. A power tilt and telescoping steering wheel was among many other creature comforts like rain sensing windshield wipers, heated and cooled front seats and a hands free power trunk.

The same 3.6-liter V6 powered this car but it was tuned for 302 horsepower and 267 pound-feet of torque. It was mated to an eight-speed automatic and it had front-wheel-drive.

Neighborhood streets in New England, built long ago, are narrow. The ES 350 negotiated them without a lot of nail biting. The car was agile when negotiating intersections, many of which were not right angle affairs, and when given the chance the ES sprinted like a midsize performance sedan.

Since we were not familiar with the area, the navigation system came into play. It was relatively easy to use and accurate, if not distracting with all the alternative routing. It was hot too. But whether carrying one person or more, the air conditioning system maintained a cool cabin temperature even though it was awfully humid outside.

The ES 350 was proof to us that Lexus had upgraded all of its sedans. We drove back to Boston, parked it and got on plane and flew here. That test car had a sticker of $53,742. And the IS 350 was at the airport here where we left it.

This Lexus was different especially the interior which was black versus blond. But it was the same in the sense that it had the same quality and much the same equipment.

The drive mode system had eco, normal, snow and two sport settings. The IS 350 F Sport also had an adaptive variable suspension and a customizable drive mode. Lexus said the car’s easy handling was because of a multi-link rear suspension inherited from the brand’s GS sedans, along with finely tuned electronic power steering.

The F Sport package sharpens handling acuity with unique 18-inch wheels and special suspension tuning with a Torsen® limited-slip rear differential, while sharpening the design with unique interior and exterior trim. Inside, all-season comfort is enhanced through heated and ventilated front seats. The finishing touch on the F SPORT IS 350 experience Lexus said is a rousing engine sound to rev up the car enthusiast in anyone. We’re not sure about all that but the exhaust of our test car did have a growl.