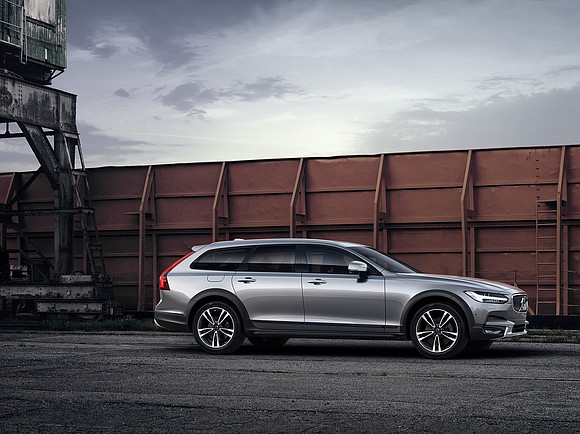 The 2019 Volvo V90 Cross County reminded us of the station wagons of the 1950s. You know, those cars that could haul kids and their stuff back and forth to school, take you to little league games, PTA meetings and then pull up in front of the country club for a black-tie affair.

Station wagons have long been a strength of Volvo. They’ve got four of them and a fifth is on the way. We had the V90 Cross Country, which is Volvo’s five door, five seat premium all-road estate. That’s what station wagons are called in Europe.

The car was different from the Volvo V90. It was an all-road vehicle meant to be comfortable but capable of handling rough terrain. Certainly not of the true off-road variety but it could handle gravel roads, hills, rocks and the rest with little problem.

That was evidenced by the off-road setting that was one of its five drive modes. The other four were eco, comfort, individual and dynamic. And although the V90 Cross Country is listed as a five-passenger estate. Carrying four people in comfort is about right. The tunnel is so high on the floor in the back-seat space that it is difficult envisioning somebody straddling it for a long amount of time.

You’ve got to have a great eye to tell a regular V90 from the V90 Cross Country. Each has the Thor’s Hammer LED headlights design, Volvo grille with Iron Mark and the word Volvo in sizable letters underling the tailgate glass.

The ride height of the Cross Country is 60 mm higher and the chassis has been strengthened to optimize performance on rugged terrain. The Cross Country also has cladding around the wheel wells and the bottom edge of the body.

The V90 Cross Country, like all Volvos, has taken its cue from Scandinavian design, which is clean, uncluttered and functional. It had an all-digital dashboard. The instruments, odometer and speedometer and the rest were projections. Volvo does this as well as any manufacturer.

The infotainment system was called Sensus. Volvo said it delivered an intuitive touch screen interface that combined car functions, navigation, connected services and in-car entertainment applications such as Spotify, Pandora, Baidu or TuneIn. The satellite radio subscription had expired on our test vehicle and we never memorized our Pandora password. Thus, we were left to plug in our iPhone and Use Apple CarPlay. The V90 also had a chord for Android Auto as well. That made using either simple.

There was a $4,000 premium audio system with several different sound modes. To say it was banging would be about right. Of course, there were voice controls, a navigation system, Bluetooth, heated and cooled front seats, a heated tilt and telescoping leather wrapped steering wheel, ample dark walnut wood trim and a panoramic roof. But that was just the beginning.

However, before we go further, let’s talk about the powertrain. Under the V90 Cross Country’s hood was a 2.0-liter four-cylinder engine with supercharger and turbocharger working in tandem. It was explained to me that the supercharger worked at low speeds while the turbocharger handled high speeds.

This combination made 316 horsepower and 295 pound-feet of torque at 2,200 rpm. The engine was mated to an eight-speed automatic transmission. The V90 was quick and fast, agile and sturdy and very maneuverable. It cruised like a big sedan without the floating front end. It was a neat ride with plenty of road feel.

The V90 had automatic braking, a collision avoidance system, what it called a City Safety system that could detect pedestrians, cyclists and larger animals like moose. Think of rural Sweden. The car even had rear collision warning, as well as rear cross traffic alert and a 360-degree camera. And it had adaptive LED headlights, adaptive cruise control and a smart key that provided for keyless locking and unlocking as well as keyless ignition.

We found Pilot Assist intriguing. It works at up to 80 mph and it was supposed to keep the V90 within its own lane. When the car gets on the dividing line it will steer itself back into the lane. We took our hands off the wheel one morning doing about 70 mph on a curvy section of the Lodge Expressway here. As the V90 Cross Country started to go out of the lane it steered itself back. In other words, the system works.

Like its predecessors, the 2019 Volvo V90 Cross Country can trudge over the roughest of roads during the day, get washed up and drop you off at a black-tie affair that night without breaking a sweat. The tab for our tester was $65,265.