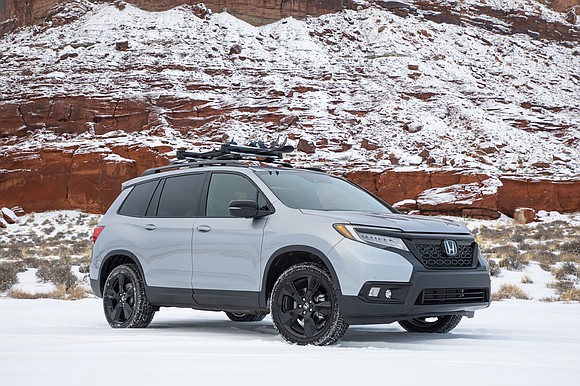 The 2019 Honda Passport was a refined crossover with a rugged look.

Inside it had what seemed like the width of a pickup truck, with a wide center console. However, it did not ride like a pickup truck. In fact, it had four ride modes: normal, snow, mud and sand. And there was a fifth, eco mode.

Powered by a 3.5-liter direct injected V6, our test vehicle made 280 horsepower and 262 pound-feet of torque. It was mated to a 9-speed automatic transmission which transferred that power to the pavement smoothly.

There was no gear selector, it was haptic buttons. This Passport, which was an all-wheel-drive Elite model, had paddle shifters too.

The all-wheel drive system had torque vectoring which Honda is branding as Intelligent Variable Torque Management with Intelligent Traction Management. The bottom line is that on dry pavement, the Passport was an excellent handling crossover.

And we weren’t exactly demoralized because there was no snow or sleet to test the all-wheel drive system. Nor were we disappointed because we did not have 5,000 lbs. to tow. That’s what Honda said the Passport’s towing capacity was. We’ll take their word for it.

There was sort of a rounded ruggedness to the Passport in terms of its exterior styling. It had standard 20-inch alloy wheels, an aggressive black grille, and increased ride height with what Honda described as a more athletic proportion and stance compared to the three-row Honda Pilot.

Yes, before we forget, the Honda Passport was a five-passenger crossover. The automaker said it offered best in class interior space. When we looked in the cargo area, we found a sizable perfectly flat cargo floor. The back third of that floor could be flipped up and it revealed what Honda called a 2.5 cu. ft. basement. It was for storing dirty items or keeping valuables out of sight, which is not a bad idea. Push a button and the rear seat backs flopped forward creating 77.9 cu.-ft. of storage.

The 2019 Passport had a reinforced unibody midsize light-truck platform, featuring a fully boxed floor structure along with a fully independent suspension offering exceptional on- and off-road driving performance.

The fully boxed floor provided a flat floor. We can see three people sitting abreast in the back of the Honda Passport and the guy in the middle being relatively comfortable because there was no hump to deal with.

The suspension provided a smooth non-undulating ride like a car. That’s where the unibody construction was most effective. Except for the ride height, the Passport drove more like a car than a sport-utility. Since we stuck to city-driving, there was no opportunity to take the Passport off road to see what it could do.

It had the latest technology including a suite of safety and driver assistance technologies like vehicle stability assist and electronic brake distribution. The rearview camera was a multi-angle system, there was blind spot alert and lane departure warning with adjustment.

This Passport had Apple CarPlay and Android Auto. However, we opted not to use a cord to make it operable. It would not or at least it didn’t work via Bluetooth. There was also wireless phone charging.

We almost forgot to mention that the 2019 Honda Passport had an EPA fuel rating of 19 mpg in the city, 24 mpg on the highway and 21 mpg combined.

We would have liked to see those numbers a mile or two higher across the board. But the mileage was not enough to disappoint us. Surprisingly, there were rear window sunshades, an 8-way power driver's seat with adjustable lumbar support, heated outside mirrors and two additional USB charging points in the back-passenger area. There was also an AC power inverter 115v-150W (plug) in the back. The liftgate was power.

Of course, there was Bluetooth, an infotainment touchscreen, satellite radio, a navigation system, digital instrument cluster and remote start. Those were just some of the creature comforts.

For $44,725 as tested the 2019 Honda Passport AWD Elite was nicely packaged with a reasonable price.