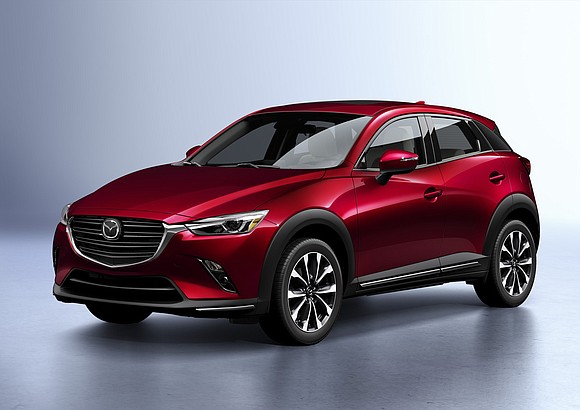 CHICAGO – The 2019 Mazda CX-3 is a small crossover. It was so small it could do a good imitation of a big hatchback. We drove one here to scope out the auto show.

On the way we encountered ice and sleet, then rain and then something akin to fog. The point is Mazda’s CX-3 handled it all relatively well.

It was powered by a 2.0-liter four cylinder engine that made 148 horsepower and 146 pound-feet of torque. It was mated to a six-speed automatic transmission with a manual shift mode and a sport mode. You don’t want to use the latter on an Interstate. It burns more gasoline because of the higher revolutions due to the gearing.

The CX-3 was rated at 27 mpg in the city, 32 mpg on the highway and 29 mpg combined. I stopped to gas up a few miles before I crossed into Indiana. I didn’t have a full tank of fuel when I left and the smaller the vehicle the smaller the gas tank; 11.9 gallons on the all-wheel-drive version which is what I had.

The power was adequate. I didn’t run anyway from anybody but I was not trying to. This Mazda CX-3 cruised nicely; I set the adaptive cruise control at 76. When I needed to pass, the CX-3 responded smartly.

Overall, the CX-3 handled well. But this drive was not much of a test. The run from Detroit to here is basically flat and straight with a few rises and gentle curves as I-94 dipped around the southern end of Lake Michigan.

The bottom line was the utility vehicle went where I steered it without any exertion on my part. It handled well too. But again this interstate was not very challenging. However, there was some wind noise as well as road nose depending on the road surface.

On highway trips, even short ones like this four-hour drive, music is critical to an interesting trip rather than a boring ride. I used the CX-3’s satellite radio for most the trip. But towards the end I used the Bluetooth connection to stream from my phone and its Pandora app.

Mazda made some incremental changes to the CX-3 but they did not alter the KODO design language which is curved fenders over the wheel wells, a long hood and a short rump.

But they did give the CX-3 a new grille, a new color for the Grand Touring trim line which I had, black piano exterior accents, chrome accents, LED taillights and 18-inch alloy wheels.

Inside the CX-3 got an electronic parking brake as standard with auto hold, a reconfigured center console that was a bigger than the old one, a new rear-seat arm rest, a front passenger seat manual lifter, red vent surrounds and high gloss piping.

I was impressed with some of the equipment. The 2019 CX-3 had a power driver’s seat. It also had adaptive cruise control, adaptive LED headlights, heated front seats and a heated steering wheel.

It was just a few years ago that this sort of equipment was exclusive to luxury vehicles.

The seats had been redesigned, they were comfortable and supportive. My only quibble so far was that there didn’t look like there was that much room in the rear.

I spent most of my time here traveling along Lake Shore Drive. It is a wolf in sheep’s clothing. It looks like a boulevard in some places when it is actually a rally race course in disguise.

The lanes are narrow, after decades they installed a low separator between north and south bound traffic. Hit it at the right (make that the wrong) angle and you’re going to sail over it into oncoming traffic. The curves are abrupt. And if you pay more attention to the lake than you do the pavement, you’ll end up in the water or on the beach.

This is no place for amateurs, drivers must be experienced at acceleration, braking and steering. You go into a sharp curve too fast you’ll end up in the wrong lane. The road surface is very good but there are some dips that can disrupt your equilibrium. In phrase, it is a great drive.

Three of us were going to attend the Charity Preview for the auto show here in the CX-3. I told the person who would likely be in the back seat, that it was kind of close and she refused so we took her sister’s car.

I’d checked the rear seat when I returned to the Motor City and she was right. There was plenty of headroom but legroom was lacking. And that was after I moved the front passenger seat forward a bit.

The instrument layout as with most Mazda products was clean. It had tri-dial climate controls. Most of the other equipment could be controlled from the touch infotainment screen and the mouse on the center console.

As tested it was $29,625 which at first I thought was a little pricey. But then I went back over the CX-3 equipment and thought that it is a small crossover with plenty of stuff. Things like all-wheel-drive, a heated steering wheel, blind spot monitoring and lane departure alert made it well worth the price.