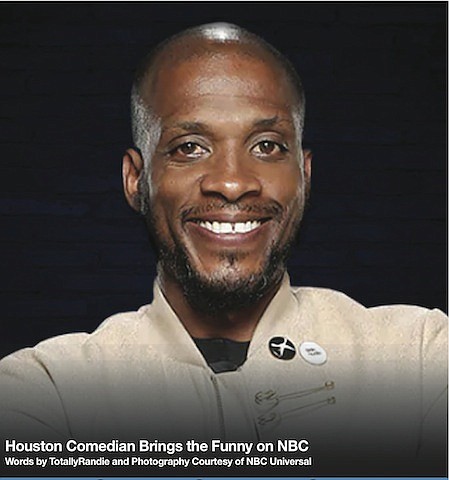 Bring the Funny NBC’s newest show which aired on July, 9, 2019, is an American comedy competition series hosted by comedian Amanda Seales. Bring the Funny’s 10- episode series features 30 contestants of various comedy acts performing in front of an audience for a chance to win $250,000. (WOW!) Series judges include Kenan Thompson, Chrissy Teigen, and Jeff Foxworthy. Ali is the the only contestant out of Houston. However, don’t mistake him as a newcomer, this laugh out loud comedian is well known in the industry.

Unlike many comedians, Ali’s comedic relief didn’t stem from a troubled childhood; instead, it is the exact opposite. Ali became a student of comedy at an early age, listening to the jovial sarcastic conversations between his mother and uncles. Of course, growing up he studied Redd Fox, Richard Pryor and even Carol Burnett. A series of unfortunate events led Siddiq to become a part of the institution of correction. However, knowing he wanted more in life, Siddiq began to perfect his craft, using his institutionalized time as motivation to build a game plan upon his release. And that’s exactly what he did. As soon as he was released, he set the Def Jam Comedy Stage on Fire and it’s been a progressive climb since then. So you could understand our surprise when we were notified that Siddiq would be a contestant. And that is why we had to sit down with the man himself.

Houston Style Magazine: No disrespect to the other judges but Ali, why aren’t you a judge?

Ali Siddiq: {Laughs} That’s a good question, or at least a host. No seriously I just look at all opportunities as just that an opportunity. This is a great stepping-stone for me and I am blessed to be in the position to do what I do.

HSM: So what attracted you to the show Bring The Funny?

AS: Its Interesting, I am not a competing comic. I have lost every competition I have been in. I just don’t do well in competitions. But I know that I am funny and being funny, that’s no problem.

HSM: Do you have a strategy to beat out the other contestants?

AS: Just be funny. Lol, that’s it. They are either going to like it or not.

HSM: What can we expect?

AS: Well I have that very like common sense humor. It’s just the way I say things, that’s my humor. I can’t say much about the episode you just have to watch it July 23rd.

HSM: Ok. Let’s switch gears just for a second. Why are you still in Houston? Most people would say you need to be in LA or New York because they have more opportunities. AS: Well that’s the problem. If every one leaves how will anyone capitalize on the opportunities here? Houston (my home) is an amazing city. We have so much talent and opportunity here; we shouldn’t have to leave to “make it”.

HSM: What about movies? Do you want do movies?

AS: Thank you for asking if I want to do movies or not and not telling me Ali you should do movies. I am not an actor; I am a comedian. I feel like acting is like using a different muscle. I haven’t exercised that muscle.

HSM: We love your philanthropic efforts when it comes to the prison system.

AS: We invest that money, we get on the road and tour. Continue to give back and pour into the community. I also want to open a language school where kids can learn to speak multiple languages. It’s really hw you combat so much hate and racism, by understanding each others culture. I could speak all day about this.

Siddiq’s episode airs July 23rd. With Houston behind him, we feel he can bring home the top prize. You might spot Ali jamming one of his top five rappers of all time, Rakim, outside of Sunshine restaurant which happens to be one of his top 5 restaurants in Houston. Until then, you can catch him in your television. For the Bring The Funny schedule, please visit nbc.com. For more on Ali Siddiq, visit alisiddiq.com