Our Democracy Depends On a Free and Fair Vote

In North Carolina, the State Board of Elections has thrown out the election results in its 9th congressional district for fraudulent activity -- probably the first time in U.S. history this has happened. The fraud was committed by a campaign, not by voters, and by a Republican, not a Democrat. For years, Republicans have campaigned for voting restrictions claiming, as Donald Trump has repeatedly, that voter fraud is widespread. In fact, it's not ineligible voters distorted election results, but rather the fraudulent efforts of an embattled Republican Party to rig the rules that has led to election irregularities.

The fraud in North Carolina's 9th District -- harvesting absentee ballots to pump up the Republican candidate's votes -- was blatant and illegal. What's undermining fair and free elections across the United States are laws and practices that are too often legal, designed to make voting more difficult for minorities and the poor, and to ensure that big money interests -- the wealthy, corporations -- speak louder.

Republicans have passed voter ID laws requiring voters to have a government-issued photo ID, which many minorities, students and the poor are less likely to have. 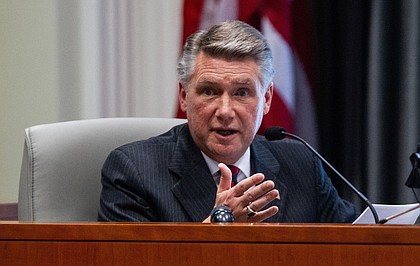 They have drawn districts -- gerrymandering -- to pack Democratic constituents in one district, allowing Republicans to have a better shot at winning two or three. Right-wing judges have ruled that corporations and the rich can give unlimited contributions -- without disclosure -- to dark money political operations. They combine these with a range of tricks and traps -- purging voter lists, making voter registration difficult, shutting down polling places for bogus reasons in minority areas, causing long lines and confusion, disenfranchising felons who have paid their debt to society but are still turned away from the ballot box, and more.

Wisconsin under former Governor Scott Walker provided the model, courtesy of big money contributions from the billionaire Koch brothers and their network. In 2012, Barack Obama won Wisconsin by a margin of 7 percent. Democrats running for the state legislature won over 51 percent of the vote. But Republicans won 60 of 99 seats in the statehouse. At the national level, in 2012, Obama's re-election year, Democrats won 1.4 million more votes across the country than Republicans in House races, yet the GOP won 33 more seats.

Voter suppression laws spread after Barack Obama stunned the country by winning a majority of the vote and the presidency in 2008. This isn't an accident. Republicans, limited by race-baiting political strategies, have turned into a whites-only party anchored in the South, while the country has grown increasingly diverse. Voter suppression -- as we saw most recently in the rule-rigging and egregious purging of the rolls in the Georgia governor's race -- is the weapon of a minority party intent on sustaining its power. In 2016, these tactics surely helped elect Donald Trump. As Ari Berman has reported, an MIT study estimated that there were more than 1 million votes lost because eligible voters didn't have the right ID or encountered long lines or couldn't register. Trump won the election by a combined total of 78,000 votes in Michigan, Pennsylvania and Wisconsin.

In 2018, though, even the rigged rules couldn't save Republicans. Voters gave Democrats a majority in the U.S. House of Representatives. It took the highest turnout -- over 50 percent -- in a nonpresidential election in over a century. Democrats won by the highest margin -- 53.4 percent to 44.8 percent -- ever recorded, and won 41 seats, the largest number since 1974.

The first order of business of the new Democratic House majority is H.R.1, the For the People Act of 2019, which contains sweeping election reform. H.R.1 would crack down on gerrymandering and reduce the influence of big money in congressional races. It would require dark money operations to disclose their donors and provide a federal matching program for small donations. It would institute nationwide automatic voter registration, Election Day registration, two weeks of early voting and limit purges of the voting rolls. It would also restore voting rights to ex-felons who have served their sentences.

Republican Senate Majority Leader Mitch McConnell, speaking of H.R.1, immediately announced, "That's not going to go anywhere." Until Democrats win a majority of the Senate and take back the White House, election reform will have to be fought at the state and local level.

Politics shouldn't be a game of beanbag toss. Our democracy depends upon protecting the right to vote and on ensuring that elections are as free and as fair as we can make them. It is a sad testament to how twisted Donald Trump's Republican Party has become that it has made election reform a partisan issue and voter suppression central to its platform.