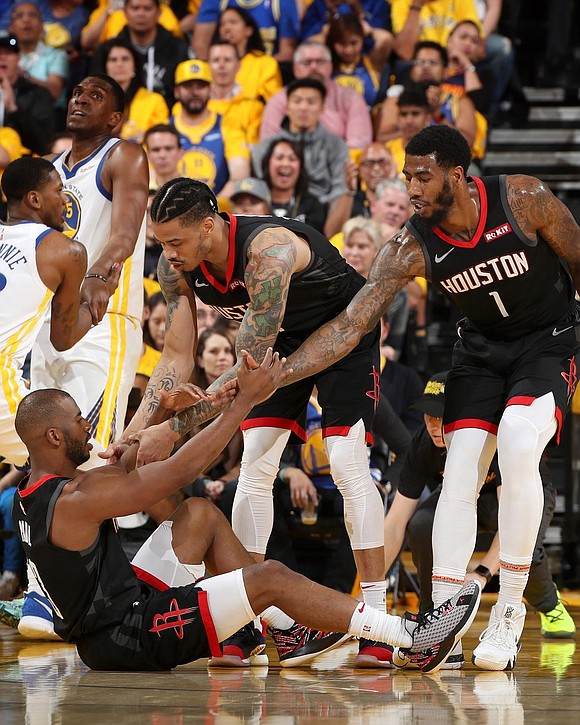 Famous actor Michael B. Jordan (Black Panther, Creed) not to be confused with the famous basketball legend Michael J. Jordan, turned down a role in a movie I am sure he thinks about and regrets to this day. World renowned music producer, Dr. Dre wanted very badly for M.B. Jordan to play his character in Straight Outta Compton, the NWA biopic, but B. Jordan declined. He took a role as the Human Torch in the Fantastic Four movie instead. To make a long story short. Straight Outta Compton made $160 million dollars at the box office while being nominated for numerous awards including, Best Writing, Original Screenplay at the Academy Awards. Fantastic Four came up empty on all fronts.

The Houston Rockets must feel like Jordan as they missed a huge opportunity to win game 5 and take a 3-2 advantage. They lost in Oracle Arena, 104-99 as they head back home to try and tie the series at three games apiece. Houston had their chance to steal game 5 after Warriors superstar Kevin Durant went down with what the team is calling a right strained calf in the third quarter with 2:11 seconds left. After making a routine mid-range jumper, Durant took one step up the court, grabbed his right leg and continued to limp until Golden State was able to foul and get Durant off the court and he did not return for the rest of the game.

It may seem strange to find victory in tragedy, but that’s just what Golden State did after Durant’s injury. The team seemed to take on the “Win for Kevin” attitude as Steph Curry resumed his leadership role and lead the Warriors to victory. He had been struggling the whole game and didn’t get his first basket until late in the second quarter and finished the first half with only five points. Yet it was his late game heroics that helped Golden State hold off the Rockets. Curry put in 12 points in the fourth quarter and finished the game with 25 points.

“Right before KD got hurt, I missed a layup right at the rim, a wide-open three in transition. That was, like, the lowest point of the game for me in terms of just searching, but when he went out, I got the ball in my hands, initiate the offense, shots went in. Again, it's all about not losing confidence in yourself, just find a way to find any type of life on the offensive end,” said Curry.

Once they review the film on tomorrow, Houston will see that they left a lot out on the court in Oakland. They will also see a bad habit they can’t seem to break in Oakland and that is allowing the Warriors to get off to fast starts in the first quarter. Golden State went on a 19-3 run lead by Klay Thompson’s 12 points and Draymond Green’s eight assists. The Warriors took a commanding 31-17 lead into the second quarter and build the lead to 20 before the Rockets would work their way back into the game by the third. Houston would finally get the lead in the third quarter after Durant went out but failed to seal the deal.

Houston will need more from starters Clint Capela and Chris Paul in game 6 as the two combined for 17 points on 6-for-24 shooting from the field. James Harden led all scorers with 31 points, but it will be his lack of shooting in the fourth quarter that will be talked about over the next 48 hours. Harden hit one shot in the final quarter with 18.6 seconds left.

“Tough one. Tough one. But we're normally capable of being better. Another opportunity on Friday. It is what it is,” said Harden after the game.

Let’s hope that they don’t let another opportunity slip through their fingers.