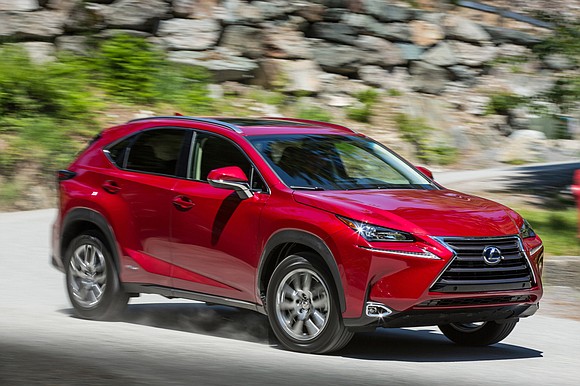 The Lexus NX 300h is yet another hybrid from the luxury automaker.

This one combines the output of a 2.5-liter four-cylinder gasoline engine and what Lexus called a small high torque electric motor. Power can shift between the gas engine and the electric motor or they can operate in tandem. Combined they supply 194 horsepower to the NX 300h.

Transferring that power to the pavement is an electrically controlled continuously variable transmission or ECVT. We don’t know if there is any advantage to this type of transmission versus a regular CVT. But it seemed to convey a little more oomph to the pavement under normal conditions.

This combination had an EPA rating of 33 mpg in the city, 30 mpg on the highway and 31 mpg combined. We thought that was a little on the low side. But 30 mpg is the magic number for fuel efficiency and the Lexus NX Hybrid topped it across the board.

As most who are familiar with hybrid systems know, regenerative braking changed the electric motor into a generator that captured the kinetic energy of the wheels when the brakes were applied. Then it was stored in the nickel-metal hydride (NiMH) hybrid battery pack.

In EV drive mode, under certain conditions, the NX 300h can run solely on the electric motor for up to 1 mile at lower speeds (below approximately 25 mph). We tried this by driving around the bock, well several blocks. The crossover hybrid stayed in electric mode but when we got to 25 mph, the gasoline engine kicked in just like Lexus said.

Lexus also said a Hybrid System Indicator and fuel consumption indicator, located in a 4.2-inch TFT screen, help coach the driver to operate the vehicle as economically as possible. Never saw it, never looked for it, ergo we never paid any attention.

But we did noticed that all the instruments were digital. The speedometer and the power gauge; all the numbers were digital but they were inside a three-dimensional ring. Thus, they looked analogue. It was a nice illusion.

The all-wheel-drive system (with intelligence) was standard. Instead of transfer gears and a driveshaft to the rear wheels, the system employed a second, independent electric motor to drive the rear wheels when needed to help maintain optimal traction. Since thank goodness winter was not upon us at the time of the test drive, this feature was not needed. And our test vehicle did sport the optional 18-inch wheels.

We climbed into the 2019 Lexus NX 300h and found the interior busy but nicely done. The floating infotainment screen was set back atop the dash; almost like it was on a downward slope. There was a cascaded look. The vents were next, followed by the climate control gauges and temperature setting.

The center-stack dropped down abruptly and there were the audio controls, the gear shifter beneath and the drive mode selector which was a dial. We were intrigued by the CD player; most of them have gone to the automotive obsolete museum. We checked it out and found it provided excellent sounds.

Farther back on the console was the Lexus haptic pad. Lexus called it the remote touch interface (RTI), which uses a touchpad with palm rest in the center of the console. The RTI helps the driver access various functions while staying focused on the road. The front-seat passenger can also easily operate the RTI.

It is a control mouse and can be unnerving for first time users. Inside the center console were 2 USB jacks, a 12V socket and an auxiliary jack grouped closely together.

The slightest slivers of dark wood trim were on the dash and the doors. And the NX Hybrid had a power tilt and telescoping steering wheel. It was heated as well. The rear seats also were power tilting and there was a power liftgate.

The rear seats were firm but bordered on being hard. There was plenty of headroom as well as legroom. They could also flip down in addition to tilting.

There was a 360 degree surround view camera with overhead view. The NX Hybrid had Lexus’ safety package that included lane departure warning and correction and collision warning. It had a navigation system, Enform app suite, rearview camera with cross traffic alert, a moonroof and premium LED daytime running lights.

A smart key with push button start and lock and unlock, power folding outside mirrors, Apple CarPlay and Amazon Alexa capability were part of the creature comforts. And of course there were heated and cooled front seats.