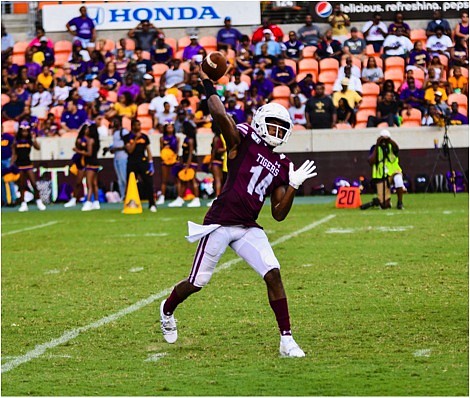 There will be an old familiar sound on Saturday, October 12th to the students, fans, faculty, and alumni off of 3100 Cleburne Street in Houston, Texas. After playing all their home games since 2012, at BBVA stadium which is home of the MLS Houston Dynamo, the Tigers fans can finally stand on their own campus and scream out this phrase they have been holding in for a while.

“I think it’s great when you can have the actual homecoming game on the campus,” said Dyan Webber, who is an alumnus of TSU.

It has been eleven long years since the Texas Southern University Tigers football team has played on their home campus. The last game played in 2008 was against Southwestern Athletic Conference (SWAC) opponent, Mississippi Valley State. TSU will face the Missouri S&T Miners at Alexander Durley Stadium at 2 pm CST.

“The students asked Dr. Lane (President of TSU) and myself and they actually passed a resolution to enhance Durley stadium,” said Athletic Director and former NCAA Division 1 scoring leader for TSU men’s basketball team, Kevin Granger. “They wanted the games to be back on campus and everywhere we went everyone wanted us to return games to the campus, so we started putting the ball in motion and we got it done.”

The Tigers have gotten off to sort of a rough start this year under new head coach Clarence McKinney. They are currently 0-5 for the season, but they have been consistent on the offensive end in most of the games they have played in this year including a 35 -28 loss in overtime to Alabama A&M University last week.

It will take some time before all the pieces fall into place for McKinney’s unit as they have a lot of young players who will be returning for years to come.

TSU will be facing a tough opponent in the Miners who are in first place in the Great Lakes Valley Conference (GLVC). They have a 4-1 record for the season and are only surrendering 20.6 points a game to opposing teams.

Fans will not care about stats or records come Saturday, as they will finally be able to leave the tailgate area and go straight to the stadium. As I drove through the Third Ward area of Houston this week you could already feel the buzz and excitement from the community to have football back at home where it belongs.

“This is huge for the community,” said Dr. Kenyatta Cavil, who is a professor at Texas Southern and host of Inside the HBCU Sportslab. “It will bring that HBCU (Historically Black Colleges and Universities) feeling to the students who have never had a chance to experience it.”

TSU AD K. Granger echoed those sentiments when responding to how excited he was to help bring football back to his home campus.

“I went to Texas Southern, so to be an intricate part of it is very exciting," said Granger.