Houston, TX- There was a loud sigh of relief tonight in the city of Houston, even though some believed that there was never any doubt coming into an elimination game that their ace in the hole would come through for them in the clutch.

The Houston Astros defeated the Tampa Bay Rays by a score of 6-1 in Game 5 of the American League Division Series to advance to the American League Championship series against the New York Yankees. The 43,418 rambunctious fans at Minute Maid Park got a chance to witness a great pitching performance by Gerrit Cole (2-0) who stymied the Rays for one run and only two hits over eight innings. His 10 strikeouts combined with the 15 he had in Game 2 of the ALDS set a new record for most strikeouts in a single Division Series with 25.

“When you have Gerrit Cole on the mound, we win,” Astros manager AJ Hinch said after the game. “When he is as dominant as he has been, as prepared as we know he is, it’s just an exciting time for our team.

Houston’s bats came alive early in the first inning. After being outscored 14-4 by the Rays at Tropicana Field, the Astros put up four runs in the first inning and never looked back. Outfielders George Springer and Michael Brantley started things off with back to back singles against Rays starter Tyler Glasnow (0-2), and second baseman Jose Altuve drove in the Astros first run with another single to right-center field. MVP candidate, Alex Bregman hit a double to bring home Brantley and Altuve to put the Astros up 4 -0 and give Cole a huge cushion to work with.

“To see them kind of breakthrough, it was good not only just for team morale, but it was also good for the pitching side as well,” said Cole.

Tampa Bay would answer back with a homerun to right field by second baseman Eric Sogard to make the score 4-1, but that would be the Rays only run as Cole shut the rest of the bats down by only allowing another hit in the top of the fourth inning to first baseman Ji-Man Choi. 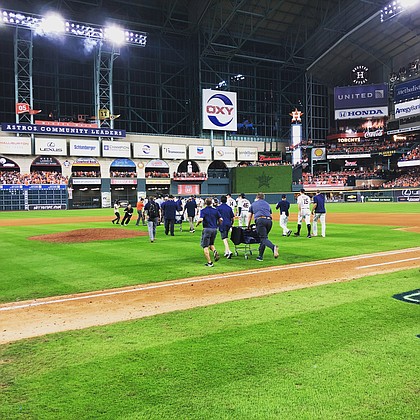 Cole, who has won 18 of his last 24 starts also led Major League Baseball with 326 strikeouts to go along with an American League best 2.50 ERA, was in total control of the game as he baffled and confused Rays hitters all night. Those numbers along with his 20 wins would have made him a favorite to win the A.L. Cy-Young award if not for the great season his teammate Justin Verlander (21 wins-2.58 ERA-300 strikeouts) is having as well.

“I was a career .180 hitter, they are not going to listen to me,” Rays manager Kevin Cash said when asked if he gave his hitters any advice on how to hit against Cole.

Houston’s bats seemed too cool down a little after facing a plethora of pitchers Cash used in order to keep his team in the game. It was a strategy he deployed to keep the Astros hitter off balance in Game 3 & 4 victories and it seemed to work up until the eighth inning when Brantley (right-field) and Altuve (left-field) hit back-to-back homeruns. That would be all Astros reliever Roberto Osuna would need as he closed the game out by striking out Choi.