Houston Texans get a signature win against the Kansas City Chiefs 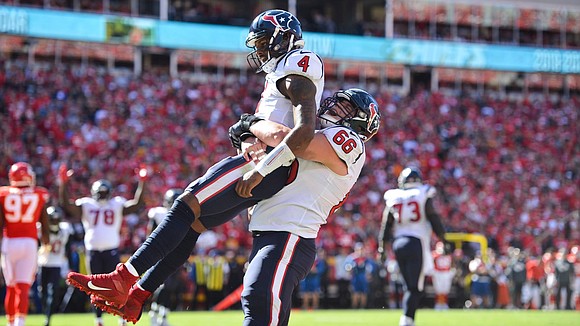 Some players in the NFL will tell you that there are games throughout the season that they mark on their calendars. Whether it’s a game against their former team, the city where they played their college games, or just an opponent that they feel is a barometer or measuring stick. For the Houston Texans, one of those teams is the Kansas City Chiefs. The Chiefs have propelled themselves into the conversation of one of the top teams in the AFC right next to the New England Patriots. But that didn’t stop the Texans from going into a hostile stadium and to get the victory over the Chiefs.

Houston (4-2) defeated Kansas City (4-2) 31-24 behind a great game plan orchestrated by head coach Bill O’Brien and quarterback Deshaun Watson. He threw for 280 yards and a touchdown while navigating two more with his legs. Watson, who was awarded the AFC Offensive Player of the Week, combined three touchdowns on Sunday giving him eight in the last two weeks and he has also led Houston on an offensive explosion by averaging 42 points a game in those games.

“It’s a wonderful feeling to be able to deal with all of the adversity, the ups and downs and the flows of the game and to be able to keep fighting for 60 minutes,” said Watson. “We never got discouraged.

The Texans fell behind the Chiefs early in the first quarter by a score of 17-3 after two touchdowns by reigning NFL MVP, Patrick Mahomes, who finished the game with 273 yards passing and three touchdowns, but had two key turnovers (interception, fumble) in the game. His interception in the second quarter by Texans safety Tashaun Gipson was his first of this season.

Houston used a deadly one-two punch of Watson and running back Carlos Hyde to lead to 20 second quarter points and put the Texans up at the half by a score of 23-17. It was the strong running of Hyde that allowed the Texans to control the clock and keep the high-powered offense of Kansas City off the field. Hyde rushed for 116 yards on 26 carries and one touchdown.

“They just let me be myself,” Hyde said. “They let me play my game and let me get downhill. The focus is not just on me. I can just go play my game, play free and just be me.”

Not to be lost in the game was the fabulous play of the Texans defense. Outside of forcing two turnovers, they held the Chiefs to eight second half points. Houston has now forced at least one turnover in 19 consecutive games, which is the longest streak in the NFL. They have also forced a fumble in nine consecutive games.

“We got ballers, we got playmakers across the board. D-line, linebackers, DBs, once we figured them out, we started learning their plays a little bit,” said second year safety Justin Reid.

Up next for the Texans is a road date against the Indianapolis Colts.