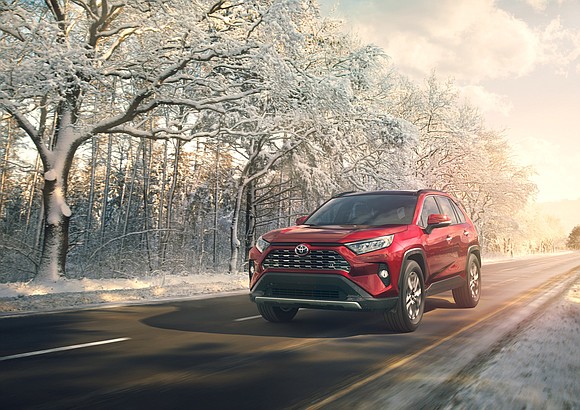 It has been more than 20 years since Toyota’s RAV4 hit this market. And case you’ve forgotten the vehicle was one of the first crossovers, thus it one of the founders of the segment. It is also a sales leader.

With more and more crossovers entering the market, Toyota has made every attempt to keep the RAV4 out front. It has been redesigned; given spiffy new technology, a better engine, more creature comforts and new sheet metal.

We thought the new 2.5-liter engine sounded a little wimpy upon start up. But there was nothing lacking in its performance. This power plant made a healthy 203 horsepower and a 184 pound-feet of torque. It was mated to an eight-speed automatic transmission.

The combination got 25mpg in the city, 33 mpg on the highway and 28 mpg combined. That mileage is for the all-wheel-drive model that we had. There is a front-wheel-drive version of the RAV4 as well as a first-ever hybrid.

We thought the transmission could be a little slippery. Let up a bit on the accelerator while cruising and then press on it and you kind of caught the gearbox off guard and that could make the direct shift transmission hesitant.

Still, the 2019 Toyota RAV4 handled well. Acceleration was excellent. Sight lines were great. The suspension was capable of smoothing out the road. Cornering was good too. The RAV4 was relatively quiet. There were six drive modes to select from: eco, normal, sport, mud and sand, rock and dirt and snow.

The compact crossover was bigger, it had a more muscled look and it featured some attributes of edge design. At one point, coming out of the fitness center we thought someone had hit our test vehicle. The creases around the pocket for the parking lights and beside the grille were so pronounced we thought the new RAV4 had been crunched.

Toyota said the RAV4 has a more chiseled and robust look. It did. It was also bigger and it sat higher. Ground clearance was increased by more than a half-inch over the previous generation RAV4. It was longer; wider but overall height was lower on some models. We had the top of the line Limited which came with 19-inch alloy wheels.

We found the seats to be soft, heated and perforated. The door panels had soft touch perforated leather-like material as well. There were two USB jacks, plenty of leg room and plenty of head room, even though there was a panoramic roof. That was the back seats.

In the front, the RAV4 had a clean look. It was admirable the way Toyota had laid out the control surfaces. The floating touch infotainment screen was ringed with buttons for the audio system, the navigation system, the phone, Apps, menu and home.

The interior was swathed what Toyota has branded SofTex seat material. This stuff was just that soft and they called it seat material but we think it was also on the doors.

Down on the left side were the controls to put the headlights on automatic, the camera for a 360 degree as well as overhead view. The heated steering wheel, the power liftgate as well as the brightness control for the interior lights.

There was another USB jack beneath the climate controls and a 12V socket. That is where the wireless smartphone charger lay as well. There were also two more USB jacks in the center console.

The instruments were analogue with a mixture of digital. The odometer and the fuel gauge and temperature gauges were framed by semi circles on either side of a large TFT screen. The speedometer was a digital readout in the center and atop the TFT screen.

This RAV4 had LED headlights and daytime running lights. Heated and cooled front seats. There was a shelf just under the dash and it went across the car. The door panels in the front were also soft touch.

There were the usual creature comforts: Bluetooth, satellite radio, voice controls, and a power driver’s seat with memory, a premium audio system and an impressive array of connection options.

The Car had Apple CarPlay, Amazon Alexa and Google Assistant capability, a smart key system on all four doors and it had pushbutton start stop. Among the options was the Entune app suite 3.0, a Wi-Fi connection. Of course there was blind side alert, lane departure alert, and a digital rearview mirror, lane tracing assist, automatic high beams and smart cruise control.

Torque vectoring was part of the all-wheel-drive system. It could direct up to 50 percent of engine power to the rear wheels, as well as distribute it to the left or right rear wheel to enhance handling on or off pavement. There was also a pre-collision system with pedestrian detection.