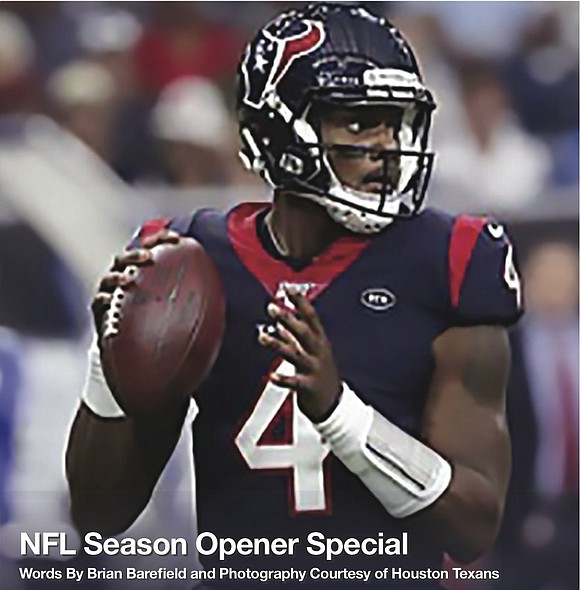 The wait is over. The Houston Texans are finally prepared to play the New Orleans Saints in their first game of the 2019 NFL season. After going through offseason OTA’s, training camp, and we can’t forget how much of an emotional rollercoaster the fans were on last Saturday. They watched an outstanding defensive player and great locker room veteran in DE/LB Jadeveon Clowney get traded to the Seattle Seahawks in exchange for two defensive players (Jacob Martin and Barkevious Mingo) and a 2020 third-round pick earlier in the day.

Social media and radio airwaves were on fire when the trade happened as Texans fans were baffled on how the franchise could not come to a long-term contract agreement with Clowney. The 2019 outcome looked very bleak for the reigning 2018 AFC South Division winners. So many questions still needed to be answered on offense and now the defense was losing a former Second-Team All-Pro.

It became evident that Texans were hemorrhaging fans by the minute with no first aid kit in the site. Just before things went completely dark, the general management team (Texans fired their former GM Brian Gaine in the offseason) pulled up in an ambulance and administered CPR by pulling off a mega trade with the Miami Dolphins.

Houston acquired left tackle Laremy Tunsil, the 13th overall pick in the 2016 NFL draft, and wide receiver Kenny Stills, a 2020 fourth-round pick and a 2021 sixth-round pick from Miami. In exchange, the Dolphins got two first-round picks in 2020 and 2021, a second-round pick in 2021, defensive back Johnson Bademosi, and tackle Julien Davenport.

The Texans also picked up running back Carlos Hyde from the Kansas City Chiefs for offensive lineman Martinas Rankin in a separate deal to help bolster the backfield after starting running back Lamar Miller went down and was lost for the year in the preseason against the Dallas Cowboys.

Wait. Did I mention that the Texans coaching staff were also in the process of making final cuts to get the roster down to 53? Yes. It was that type of day in the city of Houston.

Now that the roster has been set and the practice squad has been filled, the Texans face another difficult task in playing four teams (Saints, Chargers, Chiefs, Colts) that made the 2018 NFL playoffs in their first seven games including two who made their respective conference championship games (Saints and Chiefs). Both teams came within one play of facing each other in the Super Bowl.

The backend of the schedule doesn’t get any easier for Houston as they face the Ravens and Colts and finish off a three-week span of games against the Super Bowl LIII champions, New England Patriots.

With the sudden retirement announcement of Colts quarterback Andrew Luck, the AFC South is up for grabs and I believe the offensive moves the team made on Saturday will propel them to another division title.

Tim Kelly will take over play calling duties this year and Houston brought in “Quarterback Whisper” Carl Smith from Seattle to help bring some wisdom and knowledge to the quarterback’s room.

Protecting franchise quarterback Deshaun Watson, who finished last season with 4,165 yards passing, 26 touchdowns and only nine interceptions, has always been priority number one within the organization. The acquisition of Tunsil will give him enough time to get the ball to a wide receiver group that includes 2018 First-Team All-Pro, DeAndre Hopkins (1,152 yards receiving, 11 touchdowns, 0 passes dropped) and two guys who can stretch the field in Will Fuller and Kenny Stills. Second year tight end Jordan Akins looks like he is ready to take over as the starter after having a great training camp.

“We have a lot of reasons to be excited about where we are right now,” head coach Bill O’Brien said at his press conference on Monday at NRG. “I would say that on the roster and the moves that were made, I feel really good about being able to get a proven left tackle to protect Deshaun Watson. They're hard to draft, they're hard to develop, but Laremy Tunsil is an excellent player who was here last night, yesterday afternoon, in here right now meeting with Mike (Devlin).”

The running back position will be done by the committee to begin the season with Duke Johnson and Carlos Hyde splitting carries. Johnson is a great third down back who becomes another passing option for Watson out the backfield. Losing an experienced back like Lamar Miller (973 yards rushing) will hurt. Miller’s bruising running style made him tough to bring down, but it is his pass blocking ability that will be missed.

One major concern for Houston will be on the defensive side of the ball. Replacing a major talent like Clowney won’t be easy. Especially when you have to face future Hall of Fame quarterbacks Drew Brees (Saints), Tom Brady (Patriots), and Phillip Rivers (Chargers), one past and one present league MVP in Matt Ryan (Falcons) and Patrick Mahomes (Chiefs), Super Bowl LII MVP Nick Foles (Jags), and phenom Lamar Jackson (Ravens).

Luckily, the Texans have a player who can shut down one entire side of the field. J.J. Watt, who made All Pro at two positions last season (Edge rusher, Interior lineman) had 16 sacks last season will have some added pressure this season as offensive coordinators will send more players to slow him down without Clowney being in the lineup.

The defensive backfield for Houston is as good as they come in the AFC. Safety Justin Reid is coming off a great rookie campaign (70 solo tackles, 10 pass deflections, and 3 interceptions) and will team up with newly acquired Tashaun Gipson who was with the division rival Jacksonville last season.

My prediction is that the Texans will end the regular season with a record of 10-6. That will be good enough to win the division and get them to the playoffs. I feel for this season to be a success that coach O’Brien has to at least get the team to the AFC Championship game or they will be right back in the offseason answering questions about what went wrong.