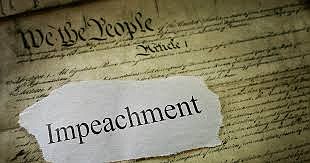 The call for an impeachment inquiry against President Donald Trump by Speaker of the House Nancy Pelosi came similar to that of a loud, exasperated sigh.

“Finally,” some House Democrats would cheer. “Impeachment Party” began trending on social media not soon after Pelosi’s announcement. After months, if not years of desire to remove the 45th President of the United States due to violations of the oath of office, a change happened. The most significant voice of the Democratic Party within Congress gave them what they wanted – a start.

What does it all mean for a presidency that has been in the headlines for numerous scandals since January 2017? It’s an explosive and damming moment; one that allows the Democratic-controlled House of Representatives to have full control over how long the process plays out.

Trump has been called to be impeached in the House previously during his term. Texas representative Al Green from Houston was the first member of the House to call for impeachment, drafting articles dating back to 2017, Trump’s first year in the White House. Green drew up articles of impeachment in May 2017, less than four months after Trump’s inauguration. He did the same again later that December, garnering 60 Dems to agree with him but not the full majority to trigger an impeachment hearing.

Still, Green wasn’t dismayed. He knew he had upset a few within the party calling for Trump’s removal, but instead of backing off, he maintained his belief.

Beyond Green, other members of the House had made it their mission to remove Trump from office. Maxine Waters, the longstanding representative from the state of California, has been a vocal proponent of impeachment since day one. Democratic Michigan representative Rashida Tlaib famously said, “We’re going to impeach [him],” albeit with far more colorful language. Others, such as current senators Cory Booker and Kamala Harris who are running for the Democratic nomination for the 2020 Presidential Election have called for Trump’s impeachment. Back in April, candidate Julián Castro was the first among the field to call for the impeachment of the non-popular Trump.

In an interview with Buzzfeed News, Green said of Tuesday’s decision by Pelosi to call for an impeachment inquiry that he felt “vindicated.”

The inquiry came after a complaint from a whistleblower into a phone call Trump made with the President of Ukraine, allegedly asking for his assistance to gain an advantage over a possible opponent in the 2020 election. That opponent would be former Vice President Joe Biden, whose son Hunter was on the board of a natural gas company in Ukraine. Biden sought to end the corruption within the company and instead, it turned into something else, a Republican talking point. Despite a memo released by the White House alleging no wrongdoing by Trump, it instead drew further criticism from both sides of the political aisle. Those who believe that the impeachment process to remove Trump is a “witch hunt” and those who believe that Trump committed numerous impeachable offenses.

The whistleblower, whose complaint was made public on Thursday, alleges that Trump misused his office for personal gain but that the White House attempted to cover it up. In layman terms, Trump tried to leverage another country into helping him win an election politically. An identical crime to the same obstruction he was suggested to have done with Russia in regards to the 2016 election.

In a nine-page document, the whistleblower wrote, “In the course of my official duties, I have received information from multiple U.S. government officials that the President of the United States is using the power of his office to solicit interference from a foreign country in the 2020 U.S. election.”

The call was so alarming to the unidentified intelligence official that he filed the complaint to the inspector general for the United States intelligence agencies. It was not that the President wanted the President of Ukraine to look into Biden but also involve his lawyer, former New York City mayor Rudy Giuliani and current U.S. Attorney General William Barr.

He continued, “This interference includes, among other things, pressuring a foreign country to investigate one of the President’s main domestic political rivals. The President’s personal lawyer, Mr. Rudolph W. Giuliani, is a central figure in this effort. Attorney General (William P.) Barr appears to be involved as well.”

Trump has denied any wrongdoing and has repeatedly stated on Twitter that no President has been treated as badly as he has. In various tweets, Trump called the news of an inquiry a “witch hunt,” “garbage,” and more. On Thursday, he suggested that whoever the whistleblower’s source was is “close to a spy” according to The New York Times.

“You know what we used to do in the old days when we were smart with spies and treason, right?” Trump reportedly told a group of staff from the United States Mission to the United States. “We used to handle it a little differently than we do now.”

An impeachment inquiry does not mean that the President would be removed from office at once. It is merely a formal announcement. After an investigation is created and completed by a few House committees whether it be the Intelligence, Judiciary, or Finance Committees, the beginning of the process will commence.

First, articles are drafted that clearly outline what crimes and misdemeanors the President has been alleged of doing to harm the United States. Secondly, the articles have to be ratified by the House of Representatives before a trial takes place. The trial occurs in the Senate, and then for a President to be removed from office, two-thirds of the Senate must be in agreement.

Twice in American history has a President been impeached, though in both instances neither was removed. Andrew Johnson was the first back in the 1860s, following the end of the Civil War and Reconstruction period. After the House voted to impeach him for high crimes and misdemeanors, a vote came to the Senate, which could not get a two-thirds majority to remove the 17th president.

Richard M. Nixon would have been the second President ever to be impeached after the Watergate scandal, but he resigned before proceedings would have begun in 1974. The House Judiciary Committee drafted three articles against him, including one that cited “false or misleading public statements for the purpose of deceiving the people of the United States.”

The third and most recent impeachment trial occurred in 1999. President Bill Clinton’s impeachment was called on by a then Republican-controlled House of Representatives for Clinton’s alleged perjury and obstruction of justice regarding a sexual harassment lawsuit from former Arkansas state employee Paula Jones and his affair with White House intern Monica Lewinsky. The Senate also failed to obtain the two-thirds votes mandated for impeachment and Clinton remained in office.

Many fear that even if an impeachment vote reaches the Republican-controlled Senate, a two-thirds majority will not convict Trump. But, unlike Johnson or even Clinton, these proceedings would take place in the middle of an election year, one where Trump is attempting to secure a second term in office.

What articles the Dems could draw against Trump seem in line with a mixture of the three prior instances, from high crimes and misdemeanors to obstruction of justice. The administration has, in no short order, spent two and a half years under a microscope, due in large part to the dealings of Trump hires for large positions within the Cabinet. There were indictments and convictions of close aides such as former campaign manager Paul Manafort, Trump’s former personal attorney Michael Cohen, his former National Security Advisor Michael Flynn and more.

The plain of it regarding Trump is that House Dems could have called an inquiry into previous scandals such as whether or not he was involved in the Russia investigation that spawned the Mueller Report. Or whether or not he was making money via political leaders staying as guests at his numerous hotels and properties under the emoluments clause. Instead, by focusing initially on the whistleblower complaint and all it entails, the House is squaring its focus on something so blatant that even the President’s own White House attempted to cover up to protect him.

However, a strong general public believes that Trump should be punished for all of his crimes committed while in office, not just Ukraine. A laundry list of offenses from hush money to an adult film star with whom he was having an affair, the fact that the Mueller report didn’t exonerate Trump and more. As Black and Brown voices early on called for the removal of Trump, it took a simple phone call and complaint that forced the hand of the rest of the party.

There’s only one shot in regards to impeaching a President. The Democrats don’t want to miss perhaps their best chance yet.