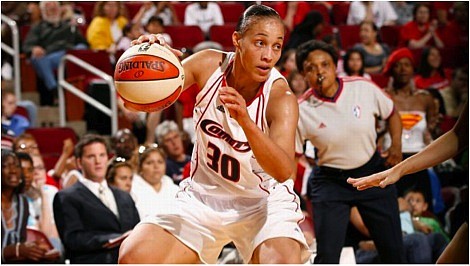 Former WNBA star Becky Hammon made headlines back in August of 2014 when she became the first full time female coach in NBA history for the San Antonio Spurs. Some will say she blazed the trail for the female coaches behind her, as a record number 11 women are currently on staff with other NBA teams around the league.

Another former WNBA star used Hammon’s as an example and decided to blaze her own trail in the men’s collegiate basketball ranks. Tamara Moore was hired as the new men’s basketball head coach at Mesabi Range College in Virginia, Minnesota. She is the first African American woman to coach a men’s basketball team in any college rank.

"Now, it's time for me to show you guys and show people that women are just as knowledgeable as men to coach the game," Moore said per ESPN.

Moore will also serve as the head women’s softball coach during the spring season as she announced on Instagram that she had signed five players to National Letters of Intent and will continue to recruit for both sports as the year goes on.

Mesabi Range College is a member of the National Junior College Athletic Association and competes in the Minnesota College Athletic Conference. They had an overall record of 6-19 in 2019 as the season was cut short due to COVID-19. This coming off a 2018 season where they finished with a conference record of 12-4 before losing in the Region XIII Quarterfinals.

Moore was a high school All-American Minneapolis North before playing at Wisconsin where she was selected to the All Big-Ten First team twice. The Miami Sol made her the 15th overall pick in the 2002 WNBA Draft where she played six seasons before ending her professional career in the United States with the Houston Comets.

The Minnesota native was coaching girls’ basketball at Edison High School in Minneapolis before accepting the job at Mesabi Range.