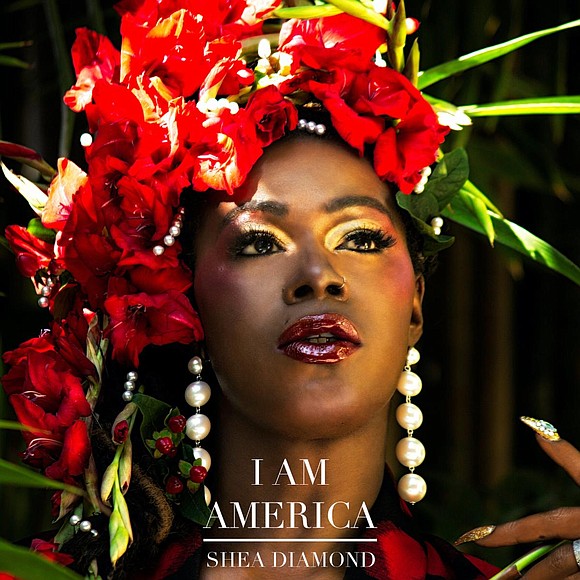 Uncertainty often breeds tension and division, but singer-songwriter and trans woman Shea Diamond, reminds listeners of the undeniable truths with new single 'I Am America,' - available today on all platforms here. The tour de force's new Justin Tranter co-written and Eren Cannata produced-party track is featured as the theme to prolific new HBO unscripted series, We're Here starring Bob the Drag Queen, Eureka O'Hara and Shangela Laquifa Wadley. The up-tempo song drags you to the dancefloor, while pointing out to listeners that our very differences are what make us the same.

When asked on what inspired the anthem, Shea shares, "With Covid19 and social distancing the world is divided and the LGBTQ+ community is silenced during one of the most important elections of our lifetime. At a time when our rights and our very Existence are constantly under attack, #iamamerica sends a clear and direct message that we are here, we are trying to thrive and survive like anyone else. No matter what anyone says we are just as American as mom's cherry pie."

"The declaration of Shea Diamond, a black trans woman, saying I Am America makes me so emotional," remarks Tranter. "Yes we co-wrote a party anthem filled with joy, but that simple sentiment still brings tears to my eyes. And the diverse folks that participated in the video only furthers that sentiment. We Are America."

The track will feature an accompanying video premiering today, April 23 at 12PM EST on YouTube, and features cameos by an all-star cast of friends, from FX's American Horror Story, Angelica Ross, to HBO stars Eureka O'Hara, Bob the Drag Queen and Shangela, to Justin Tranter, Marquise Vilson, Buck Angel, Chella Man, Alok Vaid-Menon, Jacob Tobia and Shea herself. The track and video are available across digital platforms, and fans can hear it live on-air at during the premiere of We're Here at 9:00PM ETon HBO and for free on the YouTube Premieres platform.

Shea Diamond is a singer and songwriter who makes soul-rooted music of resistance and liberation. Based in New York City, she was born in Little Rock, Arkansas and spent portions of her upbringing in Memphis, Tennessee and Flint, Michigan. Repressed and marginalized throughout her childhood for not accepting her gender role, she ran away at the age of 14 and entered foster care. Upon her emancipation, she lacked the means to pay for gender reassignment surgery, committed armed robbery, and spent roughly a decade in prison. While incarcerated, she developed her powerful singing style and forthright approach to songwriting.

Shea was released from prison in 2009 and relocated to New York. She continued to work on music and became deeply involved in the transgender rights movement. A clip of her performing an original song titled "I Am Her," a gutbucket blues-soul anthem for outsiders, impressed hit songwriter Justin Tranter (Imagine Dragons' "Believer," Selena Gomez's "Lose You To Love Me", Justin Bieber's "Sorry") which led to a deal with the Warner-distributed Asylum label. She has performed at pride events and HRC galas all over the country and has fans in everyone from Sam Smith and Demi Lovato to Pete Buttigieg and Joe Biden.